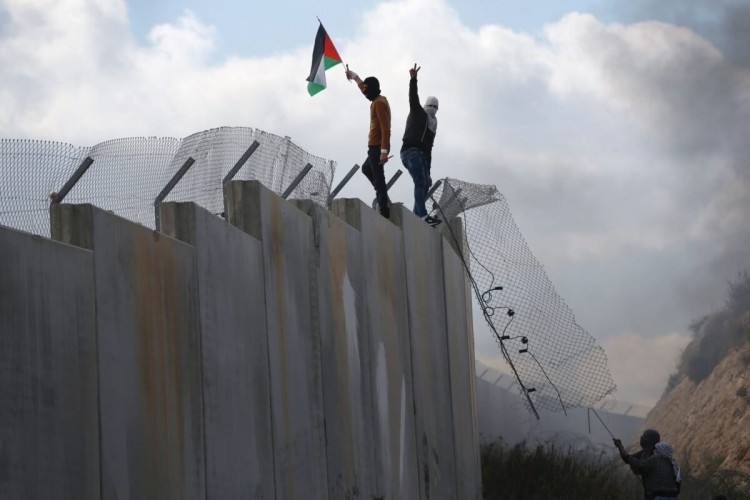 Twenty five years before Israel was established on the ruins of historic Palestine, a Russian Jewish Zionist leader, Ze”ev Jabotinsky, argued that a Jewish state in Palestine could only survive if it exists “behind an iron wall” of defence.

Jabotinsky was speaking figuratively. However, future Zionist leaders, who embraced Jabotinsky’s teachings, eventually turned the principle of the iron wall into a tangible reality. Consequently, Israel and Palestine are now disfigured with endless barricades of walls, made of concrete and iron, which zigzag in and around a land that was meant to represent inclusion, spiritual harmony and co-existence.

Gradually, new ideas regarding Israel’s “security” emerged, such as “fortress Israel” and “villa in the jungle” — an obviously racist metaphor used repeatedly by former Israeli prime minister, Ehud Barak, which falsely depicts Israel as an oasis of harmony and democracy amid Middle Eastern chaos and violence. For the Israeli “villa” to remain prosperous and peaceful, according to Barak, Israel needed to do more than merely maintain its military edge; it had to ensure the “chaos” does not breach the perimeters of Israel’s perfect existence.

“Security” for Israel is not simply defined through military, political and strategic definitions. If so, the shooting of an Israeli sniper, Barel Hadaria Shmuel, by a Palestinian at the fence separating besieged Israel from Gaza on August 21, should have been understood as the predictable and rational cost of perpetual war and military occupation.

Moreover, one dead sniper for over 300 dead unarmed Palestinians should, from a crude military calculation, appear to be a minimal loss. But the language used by Israeli officials and media following the death of Shmuel, whose job included the killing of Gazan youngsters, indicates that Israel’s sense of dejection is not linked to the supposed tragedy of a life lost, but by the unrealistic expectations that military occupation and “security” can co-exist.

These fantasies, which satisfied and guided the thinking of successive Zionist and Israeli leaders since the times of Jabotinsky, work only in theory.

Time after time, resisting Palestinians have made a mockery of Israel’s security myths. The resistance in Gaza has exponentially grown in its capabilities, whether in preventing the Israeli army from entering and holding positions in the Gaza Strip or its ability to strike back at Israeli towns and cities. Israel’s effectiveness in winning wars and keeping its gains has been greatly hampered in Gaza, as Israel’s efforts have also been repeatedly thwarted in Lebanon in the last two decades.

Even the iron dome, an “iron wall” of a different kind, proved to be a failure in terms of its ability to intercept crudely-made Palestinian rockets, with Professor Theodore Postol of the Massachusetts Institute of Technology arguing that the success rate of the dome was “drastically lower” than what the Israeli government and army have reported.

Even the Israeli “villa” was compromised from the inside, as the popular Palestinian uprising of May 2021 has demonstrated that Israel’s native Palestinian Arab population remains an organic part of the Palestinian whole. The violence, at the hands of the police and rightwing militants, that many Arab communities inside Israel have endured for taking a moral stance in support of their brethren in occupied Jerusalem, the West Bank and Gaza, indicated that the supposed “harmony” within Barak’s “villa” was a construct that shattered within a few days.

Still, Israel refuses to accept what otherwise should have been obvious and inevitable, that a country’s existence which is sustained through walls and military force, will never be able to find true peace and will continue to suffer the consequences of the violence it inflicts on others.

A public letter issued by the Israeli army’s chief of staff, Aviv Kohavi, on September 4, in response to the widespread criticism over the killing of the Israeli sniper, further highlighted one of Israel’s major national fault lines. “The readiness to sustain loss of life is crucial to national resilience, and that resilience is vital to the continuation of our very existence,” Kohavi wrote, an assertion that sounded alarm bells throughout the country, leading to a political controversy.

This controversy was compounded with the news of six Palestinian prisoners escaping Israel’s most secured Gilboa Prison on September 6. While Palestinians celebrated the daring escape, Israel plunged into yet another major “security” crisis. This single act by Palestinian freedom fighters seeking an escape from the Israeli gulag that lacks the minimal requirements of justice or the rule of law, was treated in Israeli media as if the very collapse of the security state. Even the recapture of some of the prisoners hardly altered this reality.

Israel’s iron walls are falling apart at the seams and the fortress is crumbling, not only because Palestinians never ceased resisting, but also because the militaristic mindset through which Israel was conceived, constructed and sustained was a failure from the very start.

Israel’s problem is that its military fortress was built with major design flaws that were never corrected or even addressed. No nation on earth can enjoy long-term security, peace and prosperity at the expense of another nation, as long as the latter never ceases its fight for freedom. Possibly, early Zionists did not factor in that Palestinian resistance could last for so long, and that the baton of freedom fighting can pass on from one generation to the next. It behooves Israel to accept this unavoidable reality.

Until Israel abandons its foolish “security” fantasies, there can never be true peace in Palestine, neither for the occupied and oppressed Palestinians, nor for the Israeli occupiers.

Abderrahmane Amor is campaign manager at Freedom First, commentator and former staff member of the Bernie Sanders campaign for president.