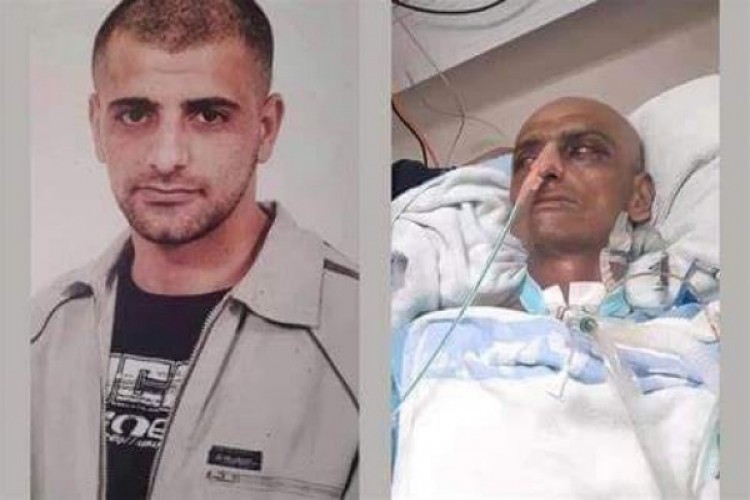 Ex-detainee martyred due to the occupation's medical negligence

On Wednesday evening, Sept 23, the ex-detainee, Hussein Masalma, who had cancer, passed away after his health deteriorated due to the occupation’s negligence.

The martyr, Hussein, from Bethlehem, had reached a very critical point and had stayed, since his freedom in February 2021, in Hadassah Hospital until he was transferred weeks ago to the Istishari Arab Hospital in Ramallah.

It is noteworthy that since the end of 2020, although Hussein's health had deteriorated, and he had suffered from pains that required him to be taken to a hospital, the occupation jail’s administration disregarded his bad conditions. It also followed a systematic policy of medical negligence (Deliberate Killing) against him, where he was held at the "Negev " jail. When his health markedly worsened, he was transferred to the hospital, where he was diagnosed to have been infected with leukemia, and that cancer was in an advanced stage.

It is noteworthy that the martyr Hussein was detained in 2002 and was sentenced to 20 years in prison, of which he had spent about 19 years.

The liberated martyr Hussein Masalma was subjected to deliberate killing by the occupation, noting that the martyrdom of Hussein a few months after his release, sounds the alarm bell that dozens of sick detainees, 15 of whom have cancer, may face the same fate, the Prisoners’ Information Office confirmed.

For its part, the Islamic Resistance Movement Hamas held the Zionist occupation fully responsible for the martyrdom of the liberated prisoner Hussein Masalma. Add to that, this crime is against humanity and is added to the black record of the occupation and its series of crimes against our brave prisoners. Hussein's martyrdom also reflects the occupation’s flagrant violation against the Palestinian detainees, particularly, the sick ones.