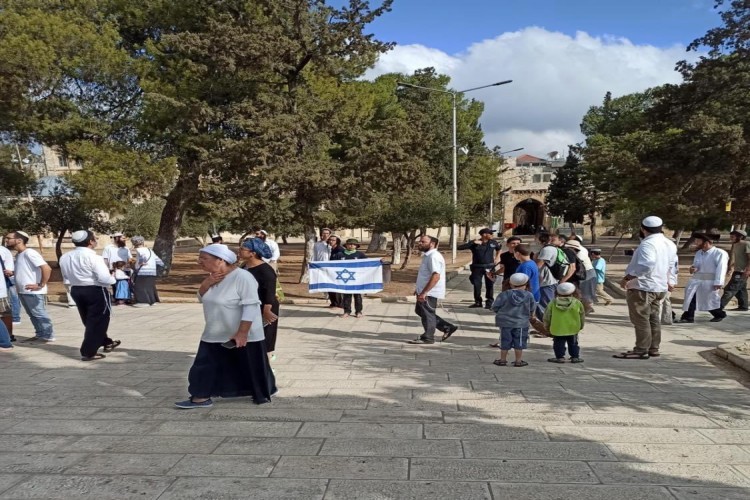 OCCUPIED JERUSALEM, Sept 27 - On Monday morning, hundreds of extremist settlers stormed in the blessed Al-Aqsa Mosque through the Bba al-Magharibah (Moroccan Gate), under heavy protection of the occupation forces, and raised the flag of the “Israel” in its courtyards, on the last day of the Jewish “Sukkot”.

One of the settlers raised the flag of the occupation during the storming of Al-Aqsa Mosque this morning, in a serious development and a flagrant violation of the sanctity of the mosque, Jerusalemite sources said.

626 settlers desecrated the Al-Aqsa Mosque since the morning, organized provocative tours in its courtyards, and performed public Talmudic rituals in the mosque, and at Bab al Silsilah (Chain Gate), the sources added.

Coinciding with the incursions, the occupation forces arrested a Palestinian young man, on the pretext that he was praying in the settlers’ path to Al-Aqsa, and checked the identities of the worshipers arriving at the mosque, and retained some of them at its external gates.

Director-General of the Awqaf Department, Azzam Al-Khatib, said that the occupation authorities have turned the Al-Aqsa Mosque into a complete military barrack in light of the increasing number of settlers, describing the situation inside it as very bad and that the mosque is completely desecrated.

Yesterday, Sunday, about 1024 settlers stormed in the Al-Aqsa Mosque through the Mughrabi Gate and carried out provocative tours and performed public Talmudic rituals and prayers in its courtyards.

During the Jewish holidays, Al-Aqsa Mosque has been witnessing an unprecedented rise in the number of intrusive settlers, and wholesale violations of the sanctity of the mosque, amid tight restrictions on worshipers by preventing them from praying in the squares during the passage of the intruders.

The Ministry of Jerusalem Affairs warned against attempts by the occupation authorities to change the historical situation in Al-Aqsa Mosque, in light of the constant incursions by settlers, in large numbers.

In a statement on Monday, the ministry confirmed that what is happening in Al-Aqsa is a blatant and dangerous violation, and comes within the framework of imposing a new reality, to change the religious and historical situation that existed there before the 1967 occupation of the city.

"Extremist groups deliberately use “Jewish holidays” to desecrate the mosque through massive incursions, dressed in religious clothing, trying to perform Talmudic rituals such as lying on the ground provoking the feelings of Muslims in the mosque, Jerusalem, and around the world," the sources added.

These violations coincide with calls to divide Al-Aqsa Mosque temporally and spatially, which portends severe and dangerous risks.