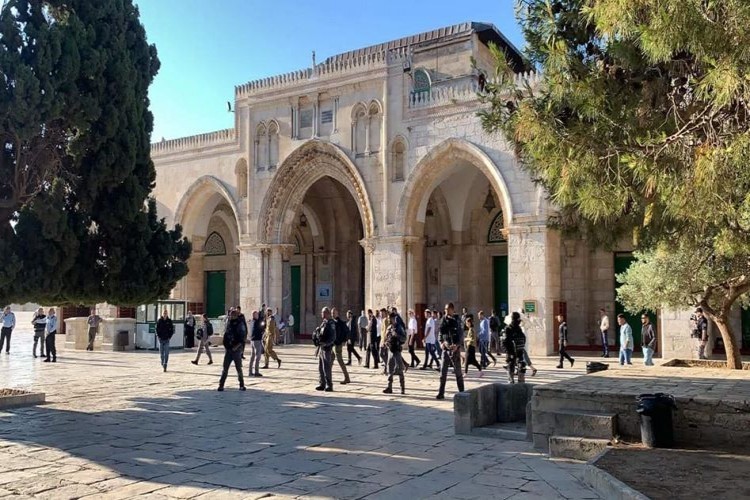 73 settlers desecrated, in groups, Al-Aqsa Mosque through the Bab al-Maghariba, and performed Talmudic rituals in the eastern region of it, and carried out provocative tours in its courtyards. Meanwhile, the occupation forces tightened their military measures against Palestinian worshipers, eyewitnesses reported

The neighborhoods and towns of occupied Jerusalem witnessed last night, and until dawn today, confrontations between the Israeli occupation forces and the Palestinian youths.

Dozens of settlers gathered on Al-Wad Street in the Old City of Jerusalem, sang loud songs through loudspeakers, and danced amidst the heavy presence of the occupation and the closure of some roads.

The Israeli occupation forces fired tear gas and sound bombs extensively at the youths and houses, while they chased the youths in the streets and inside residential neighborhoods trying to arrest them.

Occupied Jerusalem and its gate are witnessing strict security measures represented in the thorough inspection of the residents and worshipers in Al-Aqsa, in addition to a number of provocations by the soldiers against the young men.

In parallel with the crimes of the occupation, young Jerusalemites are exposed to daily provocations by the settlers who organize marches and gatherings, in addition to the daily incursions into Al-Aqsa Mosque.