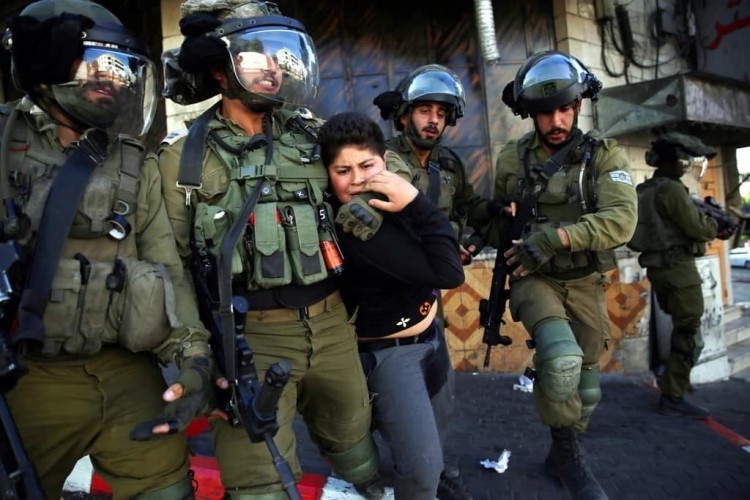 During September, the occupation authorities continued abusing and arresting the defenseless Palestinians, where (350) Palestinians have been arrested, including 36 children and 11 women, the Palestine Center for Prisoners' Studies monitored.

The occupation forces intensified, during September, the detention campaigns in the city of Jenin, during which more than (60) of the relatives and assistants of the Gilboa jailbreakers who managed to liberate themselves reportedly through the “Freedom Tunnel, they dug. While the report monitored 3 cases of arrests from the Gaza Strip of young men who crossed the separation fence on the eastern borders of the Strip, Palestine Center for Prisoners’ Studies stated in its monthly report on arrests.

The researcher, "Riyad Al-Ashkar", director of the center indicated that the occupation forces continued to detain Palestinian women during September, as 11 cases of arrests of women and girls were recorded, including the female student "Ghada Kawazbeh" from al-Khalil, Asma Asi, 29, from occupied Jerusalem, and the young woman, Ghadeer Qararia, wife of the detainee, Malik Fashafsha, from Jenin.

They also arrested, from Jenin, "Basma Ardah", 35, sister of the captive "Mahmoud Ardah", one of the heroes of the Freedom Tunnel, and "Sherihan Shawka", 33, from Bethlehem, to put pressure on her husband, "Hassan Shawka" to give himself up. And the female Palestinian "Taqqa Zahran" sister of the martyr "Ahmed Zahran", who was martyred by the occupation forces a week ago.

Moreover, the occupation forces detained the al-Aqsa guard, Aida Al-Sedawi, 59, and the Jerusalemite Raeda Saeed while in Al-Aqsa Mosque, and arrested the girl “Manar Kandus”, as well as her mother, Wafaa Kundus.

During September, the occupation continued to target minor children, as the Center monitored (36) cases of arrest, all of whom were school students, the youngest of whom were the two children Muhammad Saleh Amira, 13, and Muawiya Manasra, 14, from Ramallah, and the child Moaz Abu Al-Hawa, 14, from the Old City of occupied Jerusalem.

Until the end of September, 6 Palestinian prisoners continued the battle of empty stomachs, against the administrative detention policy, the oldest of whom is the prisoner “Kayed al-Fusfous” from Dura, south of al-Khalil, who has been hunger striking for 81 consecutive days. And the prisoner Miqdad al-Qawasmi from al-Khalil has been hunger striking for 74 days ago. The prisoner "Alaa al-A’raj" from Tulkarm has also been on a hunger strike for the 55th day in a row, "Hisham Abu Hawash" from Dura, south of al-Khalil, for 47 days, while "Raiq Bisharat" from Tubas for 42 days. While the prisoner "Shadi Abu Aker" from Aida refugee camp in Bethlehem continues his hunger strike for the 39th consecutive days, in refusal to renewing his administrative detention, al-Ashqar pointed out.

Al-Ashqar indicated that the occupation courts continued, during September, issuing administrative detention (detention with no trials or charge) decisions against the prisoners, as 84 new/renewed administrative decisions have been issued, for a period starting from two to six months.

The occupation jails, last month, were on the brink of an abyss after the punitive measures imposed by the occupation prison administration against the prisoners after the Freedom Tunnel, al-Ashqar confirmed.

The occupation experienced a sense of severe shock and anger after the six prisoners managed to liberate themselves in light of the maximum-security system inside and around Gilboa prison, al-Ashqar said.

The prisoners, says al-Ashqar, rejected these sanctions and announced their intention to go on an open hunger strike, which prompted the occupation to abandon their punitive measures, so they suspended their escalatory steps, waiting for the occupation authorities to implement the agreement by returning the situation to what it was before the Gilboa breakout.

Al-Ashqar revealed that the prison administration abused the six prisoners after re-arresting them, where they were subjected to severe torture and were put in solitary ‘death cells in different jails.