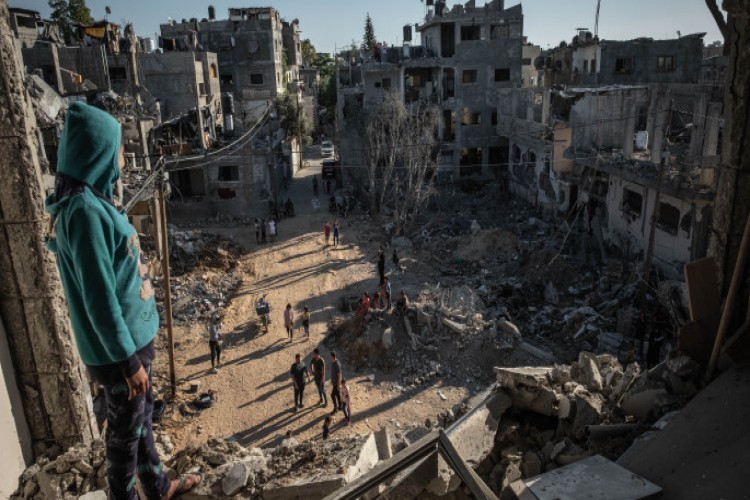 Will an ICC probe into Israeli war crimes finally bring justice to Palestinians?

In a July report entitled Gaza: Apparent War Crimes During May Fighting, Human Rights Watch (HRW) focused on three cases in which Israeli airstrikes struck civilian targets in Gaza: four homes in Beit Hanoun, a three-storey house in Al-Shati Refugee Camp, and a group of houses on Al-Wehda street in Gaza City.

Combined, these attacks killed a total of 62 Palestinian civilians, many of whom were members of one family.

The rights group's investigation was preceded by a report by Amnesty International in May, which painted a similarly grim picture of Israel's violations. Amnesty stated that Israel had displayed a shocking disregard for civilian lives by targeting residential homes and killing entire families.

The attacks "may amount to war crimes or crimes against humanity," the rights group said.

Both HRW and Amnesty have suggested escalating the investigation to the International Criminal Court (ICC). This was perhaps encouraged by the Office of the ICC's Chief Prosecutor indicating that it was monitoring the situation in Gaza on 12 May, as well as the escalation in the occupied West Bank and Jerusalem.

The reports came only months after Fatou Bensouda - the ICC prosecutor - opened an investigation into the "Situation in Palestine", looking at crimes committed since Israel's Gaza onslaught in June 2014.

The State of Palestine obtained formal ICC membership in 2015, giving the court jurisdiction over crimes committed since 13 June 2014.

To many, the categorisation of Israel as an apartheid state by B'Tselem in January 2021, followed by HRW's accusation that Israeli authorities were committing the crime of apartheid three months later, arguably created further momentum and, therefore, may boost the ICC's mission and place it within a broader and more tangible context.

For Palestinians, the ICC's involvement in the struggle has moved the Palestinian pursuit of international justice from the realm of aspiration to reality: tangible steps may translate to international pressure which could usher the end of Israel's military occupation.

Israel, however, argues that the ICC does not have jurisdiction in the occupied territories. Some Israeli officials even argue that investigating the country qualifies as anti-Semitic. Others see it as another tool of anti-Israel bias within the UN, especially the UN General Assembly and Human Rights Council.

With this clash in place, there are concerns that the ICC's investigations may face the same fate as the International Court of Justice's 2004 ruling on Israel's segregation wall.

In 2004, the court advised that the wall was an illegal entity that must be removed and that financial compensation should be made to affected Palestinians. None of that happened.

To the optimists, even if it does not bring Israeli officials to justice, the ICC probe will at least form an additional pressure on Israel that may eventually work in Palestine's favour.

In April this year, Israel sent a formal response to the ICC's decision to investigate war crimes committed by the Jewish state. While the full text of the letter had not yet been revealed, then-PM Benjamin Netanyahu's office released a statement saying that Israel will not cooperate with the investigation and that Israel did not commit war crimes.

The response emphasised that the Hague Tribunal had no jurisdiction to open an investigation into Israel's conduct in the occupied territories since Palestine is neither a state nor has a defined border.

This logic ignores the fact that the UN General Assembly granted Palestinians a non-member observer status in 2012, allowing them to join international organisations such as the ICC.

Israel also questions the ICC's jurisdiction over non-member states like itself. Israel initially refused to sign the ICC statute fearing that the transfer of Jewish-Israelis to the West Bank and then-Gaza settlements (and the Golan Heights) amounted to war crimes under the court's mandate.

Even though Israel backtracked and signed the Rome Statute which founded the ICC, it soon withdrew its signature in 2002.

For this reason, the court was hesitant to take the case against Israel as a non-signatory state. In 2009, however, Chief Prosecutor Luis Moreno-Ocampo reconsidered, following a declaration lodged by the PA under Article 12(3) of the Rome Statute, which empowers non-member states to accept the Court's jurisdiction.

At any rate, the Israeli claim that Palestine is not a state lacks a convincing argument. According to professor Yael Ronen of the Hebrew University in Jerusalem, "Palestine has apparently been recognised as a state capable of acceding to the ICC Statute," and Israel's effective control over the Palestinian Territories, representing the future Palestinian State, does not negate international recognition of Palestinian sovereignty.

Ronen argues the claim to statehood is "not based on actual Palestinian control in the first place but on a legal entitlement".

To Palestinians, every international effort that exposes and condemns Israel's policies in the occupied territories brings them closer to achieving long-sought justice.

However, the obstacles for Palestinians to overcome are substantial. Although unchallenged by the majority of the ICC's member states, the issue of jurisdiction will continue to represent Israel's core argument to foil the ICC's probe.

"The question of the ICC's jurisdiction over the Palestinian territories has not been definitively settled yet… it will continue to occupy us over the course of these proceedings," argues Kai Ambos in the European Journal of International Law.

In that Israel is not alone, at least six countries (Germany, Austria, the Czech Republic, Hungary, Brazil, and Uganda) asked permission to present legal arguments against the tribunal's jurisdiction on Israel/Palestine.

Germany, in particular, seems to support the Israeli viewpoint. German President Frank-Walter Steinmeier, before a visit to Israel, said that the position of the German government was that the ICC had no jurisdiction over Palestinian complaints against Israel "due to the absence of Palestinian statehood".

Additionally, US interference is almost guaranteed in Israel's favour. The signs are clear: two-thirds of Congress representatives signed a letter calling upon the Biden administration to "defend Israel against politically motivated investigations by the International Criminal Court".

Even former president Trump's executive order to impose sanctions on the ICC is likely to stick. Stephen Rabb, former US Ambassador for war crimes in the Obama administration, commented that removing Trump's sanctions on the ICC has become "complicated" because American supporters of Israel "react in a visceral kind of way" to the very fact that the investigation is there, "even though these cases may not ever go anywhere."

Jehad Malaka, a Palestinian political and international relations researcher at the PLO's Palestinian Planning Center, explains that the relationship between Israel and the US is strategic and not affected by who's in office - Democrat or Republican.

"The US is unlikely to abandon Israel; it will use its influence to obstruct the Court's work," he told The New Arab.

Yahya Qaoud, a Gaza-based academic specialising in political science and public policy, says that the US has always represented a protective shelter for Israel. "Having failed the diplomatic and legal game as well as exhausted its victim claims before the international community, Israel would turn to the 'supreme law' of the US veto as a cover against being held accountable for its crimes," he told TNA.

These obstacles have rendered many Palestinians and rights activists sceptical about the outcome of an ICC probe. The international community has been holding out carrots of hope for Palestinians for years.

"The Court is just the latest in a series of international legal efforts and innovations that has stoked the (often cautious) optimism of Palestinians and their legal advocates," said professor Lori Allen at SOAS University in London.

Also, the snail-paced proceedings of the ICC mean that it would be a long time before any arrest warrants or summons are issued, if at all.

The ICC has no military power to enforce its decisions. Hassan Shad from Fair Observer explains, "with pronouncements such as the one in respect of the situation in Palestine, the ICC could end up stirring a hornet's nest," which will not bode well for its future.

However, controversy may also cause additional global attention to the Palestinian plight. To Qaoud, even though the legal proceedings may be long and difficult, they still serve to further legitimise Palestinian rights vis-à-vis a settler-colonial regime.

"The legal path represents another tool in the Palestinian struggle to hold Israel accountable. Any ruling by the ICC may also be used in any future negotiations with Israel," Qaoud suggests.

Malaka shares Qaoud's optimism that ultimately there will be an outcome in Palestine's favour, regardless of the challenges.

"An immediate investigation into Israel's war crimes may not materialise soon, thanks in part to Washington's influence which may hinder the ICC's mission," he says.  "That said, the path to justice is long, but in the end, Palestinians will succeed in bringing Israel's war criminals to justice."

There is no precedent in modern history in which a people consented to the theft of their homeland without resisting. The people of Palestine have demonstrated for 73 years that they are no exception.

The US gives $3.8 billion in aid each year to Israel primarily for military assistance that, among other things, supports Israel’s oppression of Palestinians and the occupation of Palestinian land.

Writer, commentator on the Middle East