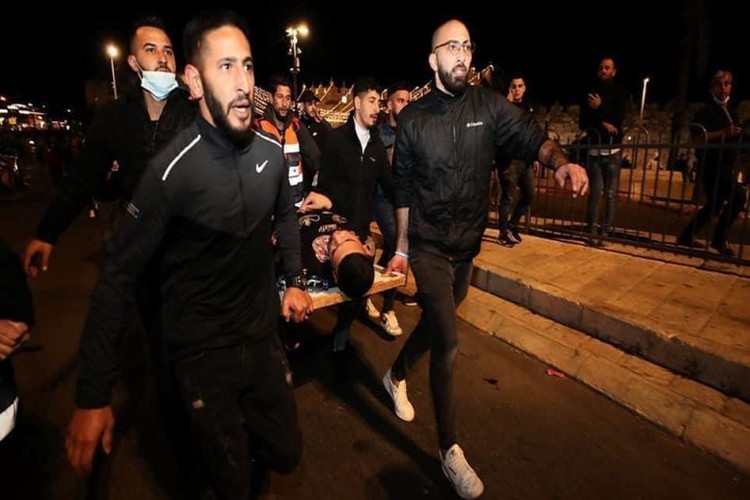 OCCUPIED JERUSALEM, Oct 12 - On Monday evening, the occupation forces assaulted several Palestinians in occupied Jerusalem, and detained a number of them, and injured others.

The occupation forces attacked Palestinian youngsters while they were in the Bab al-Amoud plaza, injuring more than 10 civilians, including journalists documenting the assault, Jerusalemite sources reported.

They also drove the Palestinian people in the Bab al-Amoud plaza away, and detained some youngsters, the sources pointed out.

Additionally, the occupation forces sprayed the residents of the vicinity of Bab al-Amoud with wastewater, causing damage to the shops that closed accordingly.

Furthermore, the occupation soldiers beat paramedics, Yazan Sallal and Malik Qirsh, at Bab al-Amud plaza, and prevented others and ambulance crews from reaching there to help the injured people.

In a related context, Sultan Suleiman Street in Jerusalem witnessed a mobilization as a result of which they pursued the young men in the street after forcing them to leave Bab al-Amud.

The occupation forces and settlers’ attacks on Palestinians in the Bab al-Amoud plaza have increased in recent days, coinciding with the excavation works in the Yusufiya cemetery and the high rate of settlers’ incursions into Al-Aqsa Mosque.

The Israeli occupation forces stormed into the occupied city of Nablus and detained the ex-detainee, Izhiman, after several days of trying to kidnap him, the sources added.