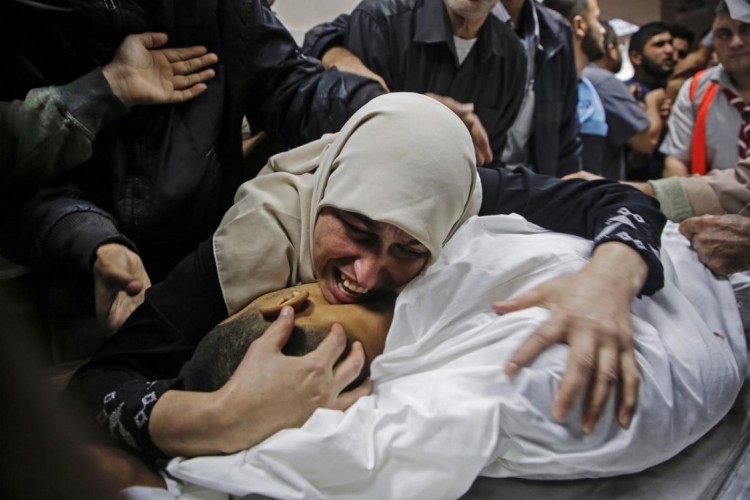 Can Anything Be Done to Prevent the Next Massacre of Palestinians?

a journalist and a political activist
November 25, 2019

Once quiet was restored to Israel’s cities after the deadly, targeted attack in Gaza earlier this month and the missiles launched in response, Israel’s citizens quickly reverted to a normal routine.

Politicians and the media resumed their nauseatingly familiar normalcy: wallowing in the eternal political swamp, the impossibility of forming the next government and incitement against the country’s Palestinian citizens. Gaza, as usual, will now disappear from the public consciousness in Israel until the next missile is launched.

In the much-battered Gaza Strip, life also reverted to routine: having buried the victims of the latest massacre, among them women and children, Palestinians may now find the time to remove the new rubble, amid ever-deepening poverty, while awaiting the next massacre. And it will come - we know that it will. The mass killing of Palestinians in Gaza has increasingly become normalized.

But assuming that this fate is not inevitable and that the Palestinian people were not created to be oppressed, humiliated, dispossessed and murdered by Israel, how can Palestinians resist this oppression, which has been ongoing for decades? Can anything be done to prevent the next mass murder of Palestinians?

You may say that negotiations could be conducted in an effort to bring an end to “the conflict”. Presumably, you would burst into bitter laughter before even finishing the sentence. Are Palestinians expected to rely on fair mediation by the White House, whose leader fully endorses all the injustices heaped by Israel upon the occupied territories?

Are they expected to rely on Israel’s good intentions, when a much more moderate prime minister than Israel’s present one sold them the Oslo lie, and then doubled the number of Israeli settlements in the West Bank, while simultaneously leading negotiations - and who was, on account of the latter, subsequently assassinated?

Or, you may say they could engage in popular protests. Do you mean the kind during which photojournalist Muad Amarna was shot and lost an eye because he was documenting a demonstration by residents of Surif, near Hebron, against the settler takeover of their village lands? Or the weekly demonstrations in the Sheikh Jarrah neighbourhood of occupied East Jerusalem, during which demonstrators have been beaten and arrested for raising the Palestinian flag - an act that isn’t even legally proscribed in Israel, despite all its racist laws?

You may say, what about mass demonstrations? By that, do you mean protests such as the Great March of Return, which despair-ridden residents of Gaza have been holding for more than a year and a half now, every Friday, facing the Gaza-Israel fence? Those demonstrations have already cost the lives of hundreds of participants and injured many more, as people protest against the life of suffering that Israel has decreed will be theirs inside the besieged Gaza Strip.

Or you may suggest appealing to the international community! Do you mean the international community that, in the best-case scenario, watches with utter indifference the slow death of the Palestinian people - or, more routinely, cooperates actively in that process by arming and funding Israel, and vetoing even the most symbolic gesture against the injustice thus caused?

This is the same international community whose most outstanding act against Palestinian dispossession was to thwart - temporarily, at this point - the expulsion of the residents of Khan al-Ahmar, while turning a blind eye to the accelerating ethnic cleansing being conducted by Israel in the Jordan Valley.

Or maybe you would say that Palestinians could conduct a nonviolent struggle, by bringing economic pressure to bear on Israel to end the occupation. Do you mean the campaign of boycott, divestment and sanctions (BDS) that Israel has managed to brand as antisemitic - a branding so successful that even liberal circles condemn the work of its activists as illegitimate?

The only legitimate answer to the question of how Palestinians should struggle against the oppression of their people is: in any way they deem appropriate. The world has stood by and watched for more than half a century, doing virtually nothing to stop Israel from crushing the Palestinian people. The world has lost the moral right to criticize the methods of struggle chosen by Palestinians.

When Israeli citizens choose - over and over again, through their duly elected political leadership - to intensify the oppression, they lose the moral right to tell Palestinians how to conduct their struggle for liberation.

When the power relations between the two sides are so radically asymmetrical as to allow Israel to do whatever it pleases with Palestinian land, Palestinian property and Palestinian bodies, ordinary moral judgment loses its meaning.

When Israel consistently uses all possible means to thwart nonviolent resistance; when fully armed Israeli forces deem a Palestinian child clutching a pair of scissors to be a “terrorist” meriting execution; when even the most symbolic act of Palestinian resistance, such as the launching of burning kites from a besieged and dying Gaza across the wall towards Israeli territory, is termed a terrorist act posing an existential threat to Israel; when Palestinians’ determination to endure on their own land is repeatedly crushed by ethnic cleansing and expulsions, then the morality in whose name the world preaches to Palestinians loses all meaning.

In the decade between January 2009 and the end of October 2019, Israeli forces killed more than 3,400 Palestinians in the West Bank and Gaza, not including the victims of the most recent Gaza massacre. There is no morality anywhere that would require Palestinians to simply sit with their hands folded as this horrifying destruction of their people approaches completion.

Those who wish to impose normative moral principles in a reality where nothing is normal should strive to provide Palestinians with the same military means that Israel has - and then, with army standing against army, each with symmetrical technological and intelligence capabilities, we could demand that the two sides be judged by the same moral yardstick.

Even better, they could act to end the illegal and lethally violent occupation imposed on Palestinians for decades - before the next massacre in Gaza. But meanwhile, every drop of blood spilt, on both sides of the barricade, is the responsibility of the people who perpetuate the occupation, and the people whose contemptible silence enables them to do so.

The views expressed in this article belong to the author and do not necessarily reflect the editorial policy of Al- Qassam Brigades.