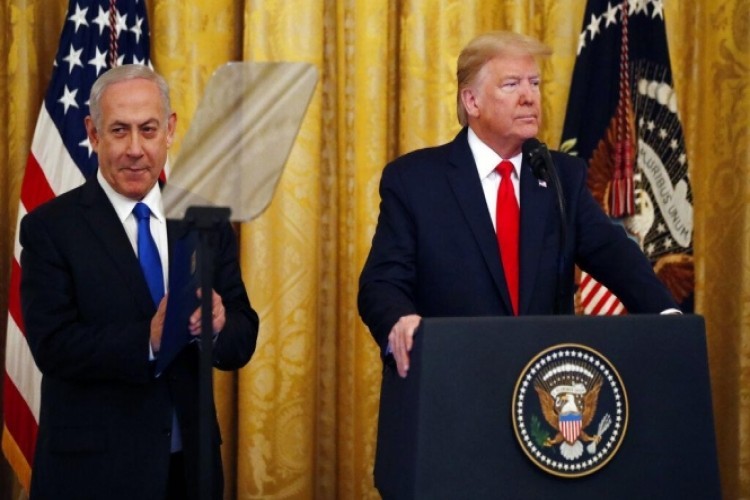 Given the timing of the release on Tuesday of President Trump’s Middle East peace plan, I have to begin by asking: Is this plan about two states for two peoples or is it about one diversion for two dirty leaders?

It sure feels like the latter. After all, both President Trump and Prime Minister Benjamin Netanyahu are, in effect, facing job-threatening charges — Trump for obstruction of justice and abuse of power and Bibi, who was literally indicted on Tuesday, for fraud, bribery and breach of trust. They both had a huge need to change the subject and shore up their common base of right-wing Jews and evangelicals.

If I were Jared Kushner and had worked for three years on a peace plan and was serious about it getting a fair and full hearing from all sides there is no way, I would have released it right now. This smells.

But then my long-held view has always been that the Middle East puts a smile on your face only if a change for the better starts with them. Camp David started with Israelis and Egyptians, and America was brought in only later. Oslo was started by Israelis and Palestinians, and America joined only later. Tunisia, the only Arab Spring country to make its way to democracy, is the one Arab country that America had virtually nothing to do with. For a peace initiative to be serious and sustainable, it should always start with them.

And yet, I also know that when America puts something this detailed on the table, it cannot be ignored, at least in the near term. Netanyahu already announced that with Trump’s blessings Israel will quickly move to apply its law (tantamount to annexation) to the West Bank’s Jordan Valley and all Jewish settlements in the occupied territory. It will be interesting to see how the European Union, which funds much of the Palestinian governing infrastructure in the West Bank, responds once it’s studied the plan, not to mention the reaction of everyday Palestinians and Arabs. (I don’t expect much. This conflict seems to have passed its fix-by date.)

O.K., despite the obvious political motivation for the timing of the release of this plan, not to mention much of its substance, is there anything in it that would impress me that the Trump administration is actually serious about promoting a two-state solution — and actually has a strategy to achieve one?

Yes, if our president did something hard. What would that be? It would be his telling Netanyahu that before Bibi extends Israeli law to all these West Bank settlements and the Jordan Valley, Trump wants one thing: an unequivocal public statement that Netanyahu accepts the fact that while Israel is getting East Jerusalem, more than 20 percent of the core West Bank, with all its settlements, plus the Jordan Valley, the remaining roughly 70 percent will become an independent Palestinian state if Palestinians agree to all sorts of security requirements.

Trump needs to say to Netanyahu: “Bibi, you say that I am the most pro-Israel president to ever sit in the White House. This plan was written with your team. I have supported your maximum position — absorbing all the Jewish settlements into Israel and all of traditional Jerusalem, and with no return of Palestinian refugees to Israel. Now I need to know, the Palestinians need to know, and the world needs to know, that this is not your new starting position. Will you agree right now that the remaining land will be a Palestinian state if the Palestinians agree to demilitarization and recognize Israel as a Jewish state? Will you agree — right now — to make no further claims ever to the West Bank and not build another settlement ever outside the areas that the Trump plan assigns to Israel?”

If Trump were to spend just a little bit of political capital doing that, I might start to take this plan seriously. But if Netanyahu is allowed to evade that question, or turns Trump down with no consequences, then this whole thing truly is a farce — it’s just the new baseline for Netanyahu’s next West Bank land grab.

Indeed, if Bibi says he still wants more than this plan gives him already — as ultranationalists in his coalition argue — then he is openly declaring before the president of the United States that his appetite is for all of the West Bank and that his vision for Israel is that it become a binational/apartheid state that will hold the 2.5 million Palestinians of the West Bank without full political rights.

This is the moment when we find out whether Bibi — who for decades has told American presidents, “Test me with a real plan and I will show you that I can be a great leader” — has any greatness in him whatsoever or is just a corrupt political hack looking to stay out of jail and will do any short-term manoeuvre necessary, regardless of its long-term impact on Israel, to do so.

Because if Bibi is serious that his ambitions stop at what he’s now gotten from Trump, then he needs a whole new domestic coalition — the ultra-zealots in his coalition will be up in arms — and a more moderate national unity government in Israel might even be possible.

At the same time, while I understand why Palestinian leaders are denouncing this plan, they should nevertheless try to make some lemonade out of these Trump lemons. It’s not as if they have a lot of great options, and their resistance to the Israeli occupation has gotten them nowhere. Palestinian leaders have been feckless and divided for some time; they boycotted the design of this plan. Still, if I were them, I’d tell Trump, “Yes, but we will use this plan as a floor in negotiations with Israelis, not a ceiling.” They would surely gain a lot of U.S., Arab and European goodwill for trying that approach. What do they have to lose?

But bottom line: Without Trump getting Netanyahu to definitively end his claims to all of the West Bank, and without Palestinian leaders able to reunite their disparate political factions in Gaza and the West Bank into a single body that can theoretically say “yes” to a fair outcome for their people, while also recognizing Israel as a Jewish state, Trump’s Deal of the Century will join a century-old library of failed Middle East peace plans.