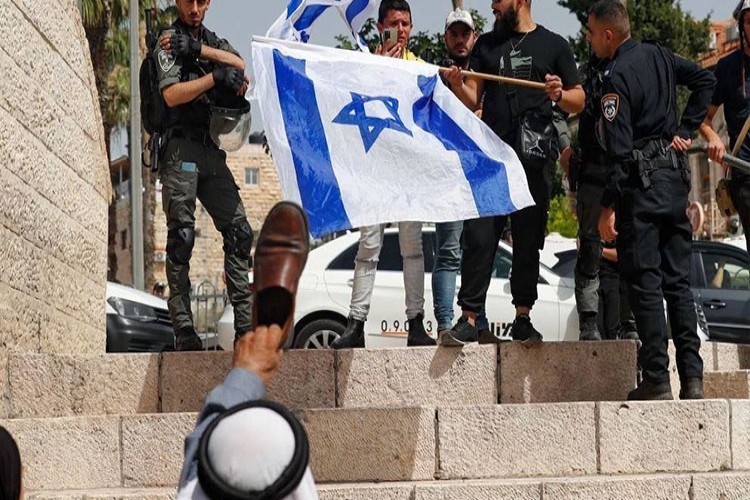 Occupied Jerusalem - Dozens of Zionist settlers stormed, this morning, the blessed Al-Aqsa Mosque, amid tight protection by the Israeli occupation forces that had stormed the Mosque to secure the storming of settlers.

As soon as the first group of colonial settlers broke into the Al-Aqsa courtyards, Palestinian worshippers confronted them with takbeer, and slogans including "With our souls, with our blood, we redeem you, Al-Aqsa."
According to Jerusalemite sources, the occupation forces closed the doors of the Al-Qibli prayer hall, and shut the worshipers off from the outside world, who in turn, with the start of the incursions, threw fireworks and knocked on the doors to confuse the settlers and the colonial soldiers present in the courtyards of Al-Aqsa Mosque.
The so-called “temple groups” called on the settlers to gather to carry out these incursions into the Al-Aqsa Mosque on the anniversary of the so-called “reunification of Jerusalem” (the occupation of the city) in 1967.
About 2,000 settlers participated this morning in the first period of storming the blessed Al-Aqsa Mosque, punder the protection of the Israeli occupation forces.

In the same context, the occupation forces detained 4 young men at Al-Sahira Gate, and detained others from inside the Mosque, including Sheikh Raed Dana, and expelled others.