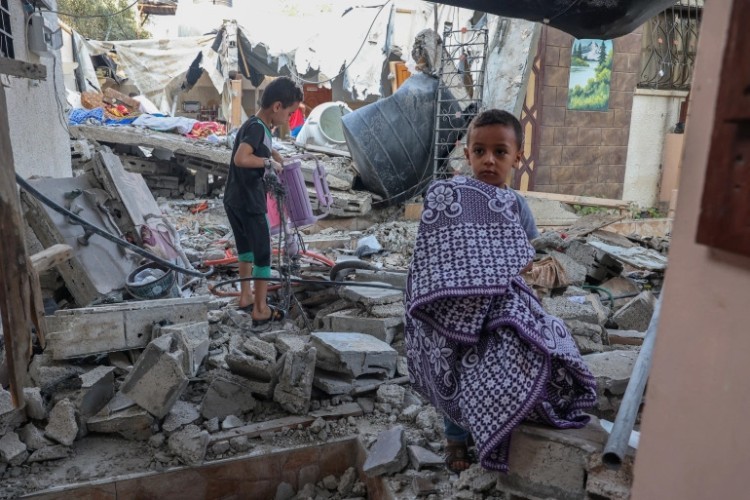 This week, in an operation chillingly named Truthful Dawn, the Israeli regime once again rained bombs on the besieged Gaza Strip. The three-day bombardment killed at least 44 Palestinians, including 15 children, and injured hundreds of others.

Back in 2012, the UN had predicted Gaza would be unliveable by 2020. By so many measures, the prediction has proved right. And yet, more than two million Palestinians continue to live there. Most of them do not live there by choice –  recent polls estimate that some 40 percent of those residing in Gaza would leave if they could.

It is not surprising that so many cannot see a future for themselves in Gaza.

Life has not been easy for Palestinians in Gaza for many years, but with every “war”, every “operation” and every attack by the Israeli leaders, the conditions are becoming even more difficult.

Gaza’s Ministry of Health now predicts, for example, that the health services – which have long been suffering because of the blockade – will soon come to an almost complete stop due to the power outages and depletion of fuel for the generators. Indeed in addition to this latest bombardment, the Israeli regime has kept all the crossings into Gaza closed, preventing the entry of fuel and other essential goods.

Never-ending state of trauma
While the bombs stopped falling on Gaza on Sunday evening following an Egypt-brokered “truce” between Israel and the Palestinian group Islamic Jihad, the repercussions of this latest assault will continue long after its end, like all the other Israeli “operations” before it.

People in Gaza are constantly trying to recover from previous bombardments while fearing the next one. And they have no way of recovering from the many injuries – both physical and mental – they have sustained.

Indeed various international NGOs and UN agencies are trying to document the never-ending mental health crisis in Gaza. Yet many of the methodologies and theories they use are totally inadequate. As Dr Samah Jabr, chair of the Mental Health Unit at the Palestinian Ministry of Health, recently underlined, this is because these organisations and agencies are trying to understand and address this crisis using Western concepts that cannot be applied to the reality on the ground in Gaza. The notion of Post-traumatic stress disorder (PTSD), for example, is inapplicable to the experiences of Palestinians, because the trauma they experience from the settler-colonial reality is “repetitive, ongoing and continuous”.

And this state of constant stress and trauma transcends generations in Gaza and the wider Palestine.

Indeed, the trauma experienced by Palestinians in Gaza did not start last week, last year, or even in 2006 when the Israeli regime first laid siege on the Strip for electing a government it did not like. It started decades ago when the Zionist movement first set its sight on Palestine as the land in which to embark upon its settler-colonial project.

It was that project, which has resulted in the enormous and continuous dispossession of the Palestinian people, that created the open-air prison that Gaza is today. Indeed, in Gaza, out of the more than two million residents, 1.4 million are refugees from elsewhere in colonised Palestine. This is why in 2018 Palestinians in Gaza launched “The Great March of Return” in which tens of thousands protested at the Israeli regime fence demanding their right to return to their lands of origin. Hundreds were shot dead by Israeli regime snipers, many more were maimed.

‘We know we are not Ukraine’
In this state of ongoing and continuous trauma, after the latest devastating assault on Gaza, the international community once again did what it does best and provided the Israeli regime with full impunity.

Countless politicians and diplomats issued statements of concern over the so-called “escalation of violence” and pleaded for a “reduction in tensions” and for “calm”. And they have been careful not to cast Israel as the “perpetrator” of Palestinian suffering – as if five-year-old Alaa Qadoum and five- and 11-year-old brothers Ahmed and Momen Al Nairab simply died of natural circumstances rather than Israel’s bombs. As if the Israeli regime has not been killing, maiming and traumatising Palestinians with zero consequences for decades.

Others in the international community did not even bother to sugarcoat their unconditional support for Israeli violence. British Foreign Secretary Liz Truss, for example, issued a statement soon after the beginning of operation Truthful Dawn in support of the Israeli regime without mentioning the killing of dozens of Palestinians. “The UK stands by Israel and its right to defend itself,” she said. This sentiment was of course hardly surprising considering the consistent and unwavering support the UK has given to the Israeli regime since its inception. It was also not surprising considering the UK supplies the Israeli regime with military hardware to bomb Gaza.

Palestinians are not naïve. We know that we are not Ukraine. We know that we will not receive the same outpouring of support as Ukrainians. No one will defend our right to resist an occupying force. The international media will not post images glorifying our martyrs. Pop stars, Hollywood actors, and prime ministers will not come and visit families amidst the rubble in Gaza.

The reality is, that without seismic shifts in the global political landscape, the Israeli regime will continue to bomb and kill Palestinians with impunity.