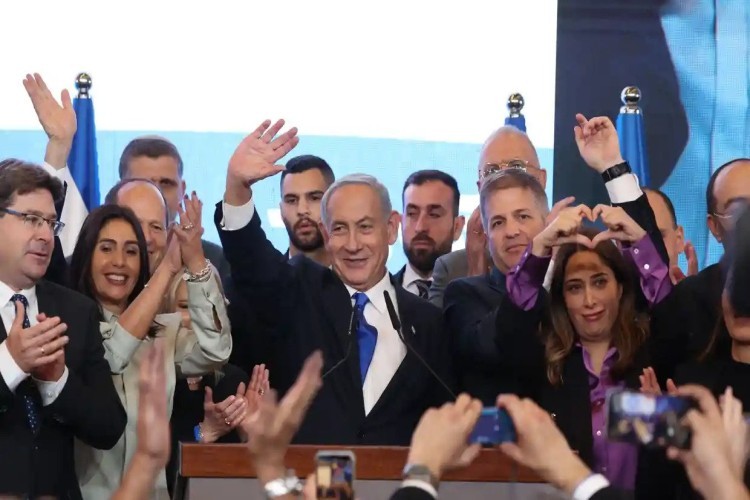 Benjamin Netanyahu has made an impressive comeback after his ousting in 2021 amid corruption allegations. In this week’s election, his party, Likud, received more votes than any other party and his far-right allies came third, paving the way for a Likud-led coalition government. Although forming a coalition isn’t an easy game – indeed, Netanyahu has failed in the previous four elections to do so – this time he’s expected to form a comfortable majority bloc with ultra-Orthodox and far-right parties.

Yet despite this prospect, for Palestinians in the West Bank and Gaza the Israeli elections have not been at the forefront of political discussion, as they continue to resist and fight for their survival on ever-shrinking territory. For them, it’s simply a matter of changing the prison guards – because across the Israeli parties, support for the continued oppression of Palestinians and the colonisation of Palestine is a uniting feature.

The leader of the Religious Zionist party, Itamar Ben-Gvir, has risen to prominence over the past year. Ben-Gvir was once considered a fringe candidate, but he has since mustered a strong following. He lives in a settlement in Hebron known as Kiryat Arba, home to some of the most extreme Israeli settlers in the West Bank, and he has built a legal career defending Jewish Israeli extremists.

His platform includes supporting full Israeli annexation of the West Bank and he has been at the forefront of supporting Israeli settler violence across Palestine. He even showed up in the Palestinian Jerusalemite neighbourhood of Sheikh Jarrah with a gun.

This emboldenment of settlers has had palpable repercussions for Palestinians, particularly in the West Bank. The United Nations Office for the Coordination of Humanitarian Affairs has reported that settler violence against Palestinians is at its highest since 2005. The increase in violence due to inflammatory rhetoric should not be underestimated. Speaking at an election rally, Ben-Gvir said: “Every time [Arabs] attack a Jewish car, our people, I run and see what’s happening … We need new rules against terrorists, we need to enable all citizens to protect themselves with guns. We need laws to protect soldiers.”

Beyond the far-right, Jewish Israeli supremacy is normalised across the Israeli political spectrum. The outgoing prime minister, Yair Lapid – a so-called “centrist” – is no exception. In 2013, Lapid told Time Magazine: “You know my father didn’t come here from the ghetto in order to live in a country that is half Arab, half Jewish. He came here to live in a Jewish state.”

At the UN general assembly in September this year, Lapid “endorsed” the two-state solution, to the delight of many in the international community who are still trying to flog that dead horse. But a mere glance at the policy positions of his party, Yesh Atid, on the West Bank reveals what it means by a two-state solution: annexation of the settlement blocs that will result in cutting the West Bank in half, leaving only islands of Palestinian autonomy.

Another so-called “centrist”, Benny Gantz, who at one point was a favourite challenger to Netanyahu among the international community in the May 2019 elections, used violence towards Palestinians as a rallying call. In his election campaign video in 2019 he used images of a destroyed Gaza and claimed to have sent parts of it “back to the stone age”.

For Palestinians, more than seven decades of oppression, theft and colonisation of land has shown that, left or right, the government makes no difference to their future. The Israeli regime is fundamentally built on their oppression. That’s why at the end of the day, Palestinians don’t want different prison guards. They want to break free of the prison.