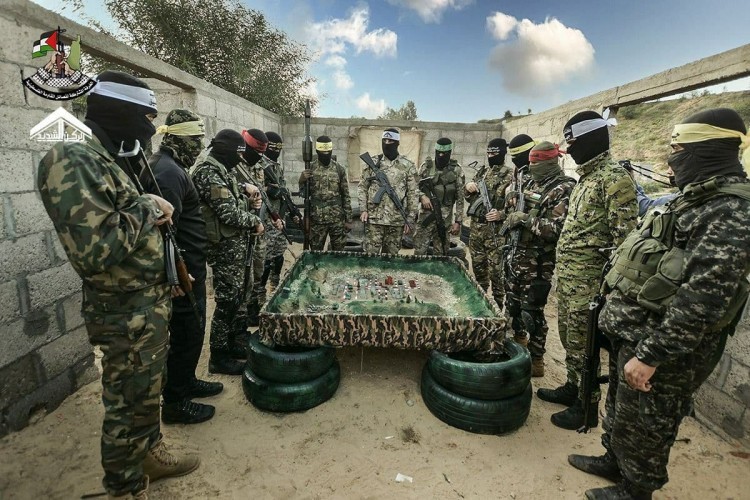 a staff writer at the Middle East Monitor
January 03, 2021

On Tuesday and Wednesday 29, 30 Dec., the military wings of Palestinian factions in the Gaza Strip carried out the first-ever joint military drill simulating threats of various scenarios of possible Israeli attacks on the coastal enclave, which has been under a strict Israeli siege since mid-2007.

A masked spokesman of the Joint Command Room, which constitutes the armed wings of Palestinian factions, including the Palestinian Islamic Resistance Movement Hamas, announced the launch of the large-scale drill.

"United, we start this military drill which aims to test our preparedness to deal with possible Israeli attacks and violations against our people," cited the spokesman who was masked with a traditional Palestinian kufiyah. "This drill is also to strengthen the skills of our fighters when they face together the Israeli threats," he added.

Although the Palestinian factions clarified the reasons for the drill, Israeli media described it as "a show of force organised by Iran." They supported their claims by raising a large poster of the late Commander of the Iranian Revolutionary Guards General Qasem Soleimani, who was assassinated by the US in Iraq last January.

As part of the arrangements for the joint drill, the factions had equal participation in the number of fighters, planning, military equipment and communication with mass media. However, the day before the launch of the drill, Israeli Hebrew newspaper Yedioth Ahronoth said that the Palestinian factions "led by Hamas" had been preparing for it, expecting that this drill came in response to the latest weeks-long drills carried out by the Gaza Division of the Israeli army.

The drill attracted widespread news coverage by Israeli media. Israeli print and online news outlets reported it through international news agencies, while many TV channels recorded clips for their reports from the Gaza-based Al-Aqsa TV. During the drill, the Israeli media divulged that all the institutions of the state of Israel, mainly intelligence ones, were closely following up the drill.

Military analyst for Yedioth Ahronoth, Alex Fishman, reported that Palestinian factions launched rockets with a range of more than 100 kilometres towards the Mediterranean, and mass media was invited to cover and report the launch. Special and elite forces carried out demonstration exercises. It is a "week of war" organised to celebrate Hamas's 33rd anniversary. He indicated that Israel was put on alert, fearing that this exercise might have become a security incident.

"Despite the Israeli airstrikes a couple of days ago, all the military wings of Palestinian factions took part in a wide-scale military drill," Israeli journalist Shai Levi told Israeli TV Channel 12, adding: "Hamas continues its activities to develop itself and increase its power." Meanwhile, Israeli radio reporter Mandy Resile recounted: "Israel did not respond to the last rocket launched from Gaza under the pretext that it did not cross the border. Now, Gaza military wings are carrying out a military drill before the eyes of the Israeli army."

While Levi and Resile expected the drill to be a show of defiance carried out by the Palestinian factions against the Israeli army, Fishman predicted that Gaza wanted to send a message to Israel by launching the rockets during the transitional period between US President Donald Trump and President-elect Joe Biden.

Channel 12 reported that Palestinian factions in Gaza carried out a PR campaign through their military drill, aiming to convey messages to Israel. The first message being: "That the Zionist enemy should be cautious if it attacked Gaza because there would be many surprises." The second message was that the factions wanted to prove their unity against any Israeli attack.

Gal Burger told Israel's Public Broadcaster Kan that he could not understand how the factions in Gaza carried out a military drill amid a severe economic crisis and the widespread outbreak of the coronavirus. To reflect the harsh economic conditions in Gaza, Burger broadcast part of an interview with a poor Palestinian from Gaza saying that his "fridge is empty".

Meanwhile, Fishman of Yedioth Ahronoth also highlighted this point. "Amidst unprecedented economic and health crises, Hamas carried out a week of war to mark its 33rd anniversary." Israeli writer Amira Hass wrote in Haaretz, blaming Israel for the deterioration of living conditions in Gaza. She explained that the Gaza Strip had been isolated from the world a long time ago, before Hamas's victory in the 2006 elections.

"This way," Hass stressed, "it is impossible that it will stand alone. Hamas, its power and its policy is not the result of isolating Gaza from the world, but a response and a result of a policy of 30 years."

Lior Akerman, an Israeli political analyst and retired brigadier general, told The Media Line: "The whole purpose of this move is to convey a message through the media to the State of Israel that, ostensibly, the terrorist organisations in the Gaza Strip also have military, organisational capability at the IDF level."