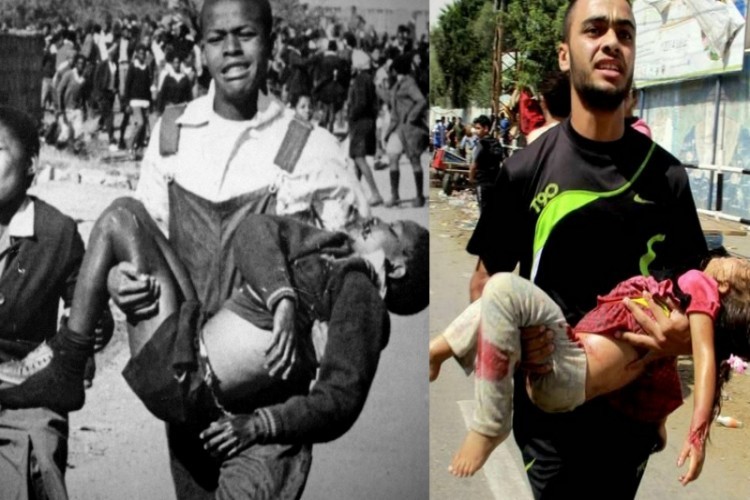 If Israel Isn’t An Apartheid State, Neither Was South Africa

Newly elected member of the British Labour Party’s national executive committee, Gemma Bolton, is being investigated by the Party over calling Israel an Apartheid State. This was followed by claims that she was anti-Semitic for stating as such. Here is why she is correct and pro-Israel advocates are misusing the accusation of anti-Semitism when it comes to this comparison.

To address the issue of whether Israel is in fact an Apartheid regime, we first have to establish a distinction between the word “Apartheid” as defined to describe the white South Afrikaners Regime of systematic oppression used against the indigenous population of South Africa and the later accepted definition which became applicable describing a similar structure used against any other groups of people who are subjugated by this type of State legislated racial discrimination. The latter is, like its former, illegal under customary international law and is defined by the Rome Statute of the International Criminal Court as follows: “The crime of apartheid” means inhumane acts… committed in the context of an institutionalized regime of systematic oppression and domination by one racial group over any other racial group or groups and committed with the intention of maintaining that regime”.

After having established our working definition of Apartheid, we can now avoid the semantic evasions which Israel advocates will attempt to use in order to deligitimise the premise of an argument to indite Israel as an Apartheid regime.

Apartheid is in violation of the United Nations (UN) charter and when the Apartheid Convention was adopted in 1973 by the UN General Assembly, the vote was unanimous with 90 nations voting against 4. Notably, amongst the four Nations voting against this adoption were the United States, the United Kingdom and South Africa itself. This is a significant point to note, as with most votes cast to condemn Israeli criminality in the UN, it is often only the US, Israel itself and sometimes the UK along with a few small Island nations who are outvoted unanimously by most of the world also. This similarity is key, given that the Israeli claim of anti-Semitism factoring into UN votes against it, is clearly debunked when we look at the voting record against the late Apartheid Regime in South Africa.

The system of Zionist power which developed in Palestine, as stated by Patrick Wolfe, “caused the doctrine evolved into a tool of ethnic conflict, as Jewish industries were actively discouraged from employing non-Jewish labour, even though Arabs worked for lower wages and, in many cases, more efficiently”. This is important to understand when it comes to giving comparisons to South Africa’s former Apartheid system, which, from its earliest developing stages undermined Black South African’s to the advantage of White South African’s.

The issue that connects both South Africa and Israel, perhaps above others, is the fact that they are both products of European Settler Colonialism, which fall into the category depicted by Ran Greenstein which suggests that Settler Colonialism “…identifies a cluster of societies in which colonial rule was combined with large-scale immigration of European settlers. Politically, allows us to focus on resilient forms of domination that serve the interests of the settlers who made a new home for themselves in overseas territories.”.

In Israel some of the most notable legislated initiatives to keep Palestinians inferior to Jews are the “Law of Return (1950) and Israeli Citizenship Law (1952) establishing the privileged group of “Jewish nationals of Israel”; Basic Law: the Knesset (1958), Amendment 9 (1985) providing that Israel is the “state of the Jewish people”, allowing exclusion parliamentary elections of political parties that challenge this principle; Basic Law: Human Dignity and Liberty (1992) restricting fundamental human rights with the proviso that these must be in conformity with the values of Israel as a “Jewish and democratic state”. The Laws evidently discriminate against non-Jewish citizens, as does the newly accepted ‘Nation-State’ bill, passed in 2018, amongst many others.

The struggle against Settler Colonialism is also similar, as forms of peaceful protest and violent resistance have been used by the indigenous populations of South Africa and Palestine alike, suffering under what they see/saw as Settler Colonial rule or occupation. In the eyes of many prominent indigenous South African’s, who fought against Apartheid, the Palestinian oppression is very much similar to what they endured. One such prominent South African is Desmond Tutu, who said: “their [Palestinian] humiliation is familiar to all black South Africans who were corralled and harassed and insulted and assaulted by the security forces of the apartheid government.”.

Like the Zionist Movement’s declaration of the establishment of Israel in 1948, the (White Afrikaner) National Party also seized power in 1948. Apartheid in South Africa is characterised by the likes of John Dugard and John Reynolds as resting on three pillars; discrimination, territorial fragmentation and political repression. Where Apartheid in Israel differs is in the nuances. South Africa’s Apartheid system was specific to that regime, just as Israeli Apartheid is tailored to the Zionist regime. The political repression that exists in Palestine today, as well as the territorial fragmentation and systematic discrimination, differs between three separate systems of oppression. The Palestinians living in what is now Israel were under military law – a different rule to that of the Jewish Israeli population – until 1966. Now the occupied peoples of the Gaza Strip and West Bank remain under Military Law, whilst Palestinian residents of East Jerusalem are denied citizenship to Israel and the Palestinians of Israel are discriminated against under specific legislation passed through the Knesset (Israeli Parliament). These three systems are different, yet all discriminate against Palestinians, with the occupied people of the Gaza Strip and West Bank suffering the most under their system, forming a type of hierarchy of oppression exacted upon Palestinians living between the Jordan River and the Mediterranean Sea. Although discrimination occurs against those Palestinians, once under Military Law, Apartheid is often generally used to refer to and examined in the ‘Palestinian Occupied Territories’ (Gaza and West Bank).

Often the argument of Israel having implemented an Apartheid Regime evokes the question as to whether the discrimination faced by Palestinians is based upon race, which can be answered by quoting an Internationally accepted conceptual definition, which is explained on the bases of understanding laid out by, M. Banton, in ‘The Idea of Race (1977)’, “…[Race] has long been shown as a social construct rather than scientific reality, with a process of ‘racialization’ entailing the social utilization of the concept of race as a biological category in order to organize and distort perceptions of the world’s various populations.”.

To further expand upon the idea of Israel having established an Apartheid Regime, it has to be noted that a report from The Human Sciences Research Council of South Africa (HSRC) in 2009 found that Israeli Laws implemented in the Palestinian Occupied Territories (OPT) was akin to discrimination based upon identity. In fact, on the issue of the Israeli Settler Colonial State ideology, Zionism was ruled by the United Nations General Assembly to be a form of Racism in 1975. This adoption was later revoked in 1991 due to political pressure, however it points to how mainstream the political discourse was, on the nature of Israel being a racist State, at one stage. In fact, prior to the PLO having accepted negotiations, effectively selling out the Palestinian cause, this sort of political dialogue on Israel was perhaps more accepted than it is today. It can’t be that we just ignore third world resistance as simply an old Cold War trend, in which the Palestinian cause is to be buried in the pages of old books, just due to the struggles old representatives having sold out, because people are still being oppressed, which requires action now.

Although there are several differences between the systems of discrimination implemented in Israel/Palestine and under the former South African regime, it is clear that on the most essential of principles which can be accorded to an Apartheid Regime, the two are more similar than they are different. Right now it is controversial to discuss the issue of Apartheid in Israel/Palestine throughout much of the English speaking world, however, up until the fall of the Apartheid regime in South Africa it was also controversial and only ceased causing political backlash when the Apartheid Regime was on its last legs. One day, perhaps the comparisons will become more obvious, when the systems of injustice fall in Israel/Palestine, as they did in South Africa, then those who fought for Palestinian human rights today, will later be looked back upon as allies in a struggle for Justice.

This is a subject that has been written upon extensively, with much more in-depth analyses having been offered than this, proving the severity of the systems of racial injustice installed in Palestine. However, the purpose of this article is to provide the reader with some easy examples to show how you can construct an argument against Zionists who insist that you are a vicious anti-Semite for even associating the two things. The aim that Zionists have, is to make all serious criticism of Israel akin to anti-Semitism in the eyes of the public and establishment. No one should stand for such a dangerous precedent being set, as this only fuels real anti-Semitism and also works to silence voices for Palestinian Human Rights.

At the end of the day, we here in the West do not have any guns pointed at our heads, we don’t have the fear of our children being targeted by predator drones – as the Palestinians of Gaza do – so we should not fear being called a word, if it is not true. If you apologise, this implies you are guilty and every time you apologise for being anti-Semitic, when you were simply calling out Israeli government policy, you help silence criticism of Israel.

For anyone reading this article who feels Israel is not a racist regime, I challenge you to find one other country on earth today, which has more racist laws than Israel. When you discover that there isn’t one, then you are left to either accept that Israel is racist, or to attempt to argue that there is no such thing as institutionalized racism altogether.