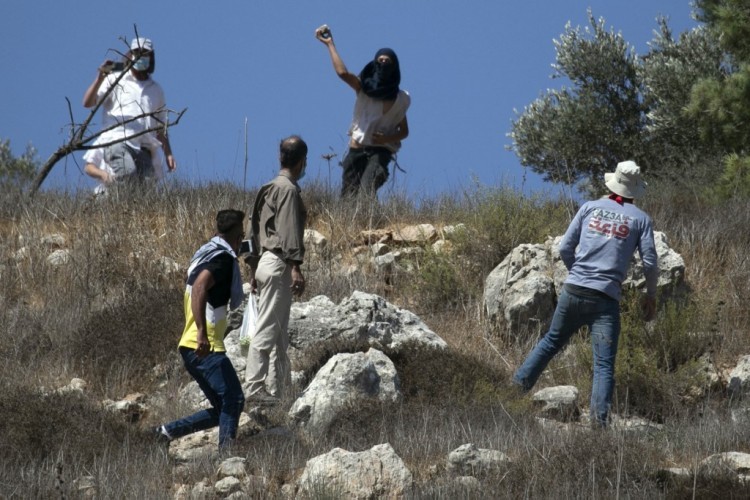 Israeli settlers' racism is not an aberration. It's part of an apartheid system

Many critics of recent anti-Arab incitement in the Yitzhar settlement continue to support institutionalised discrimination against Palestinians.

The Israeli settlement of Yitzhar, long a byword for nationalist extremism and anti-Palestinian violence, was in the news again on Monday, after residents erected a sign outside the settlement stating: “This road leads to the community of Yitzhar - Entry for Arabs is dangerous.”

As explained by Haaretz, the background to the stunt was an incident two weeks ago, when "an Arab medical worker who was sent to conduct a Covid-19 test was refused entry to Yitzhar", reportedly on the basis that "he was an Arab".

In response, the senior Israeli commander for the region "made it clear to the residents of Yitzhar that they must allow the entry of Arabs", prompting the erection of the road sign in "protest". Pictures of the sign were quickly shared on Twitter, prompting widespread outrage and opposition.

For some, the reason the sign went viral is that it constituted a "gotcha" moment when a system of segregation became crudely and explicitly spelt out. This might be partially true, but it only tells part of the story, as we can see from the range of individuals who expressed anger at the Yitzhar sign.

Critics included, for example, apologists for, and even participants in, Israel’s settlement enterprise in the occupied West Bank, such as former settlement leader and Israeli diplomat Dani Dayan, who called the sign “racist”.

One West Bank settler, educator Uri Pilichowski, declared: “I’m a settler and found this sign despicable.” He added in a Facebook post: “Every group has its bad apples and the settler community is no different.”

Tellingly, Pilichowski concluded his post thus: “My only relief is that Yizhar is constantly committing these acts which show how all the other Jewish communities in Judea and Samaria [ie West Bank settlements] never do these things.”

From this point of view, the actions of Yitzhar’s residents, while deplorable, actually become evidence of the morality of 99 per cent of settlers (note that the idea of Yitzhar as an exception, or outlier, is a commonplace reaction when these kinds of incidents occur).

In fact, the racism of Yitzhar settlers can only be understood as part of, rather than extraneous to or exceptional from, historic and contemporary policies implemented and supported by Israel’s political and military leadership, judiciary, and a majority of its Jewish public.

The exclusion and removal of Palestinians from land and communities by violence, legislation and de facto practice, is an integral part of Israel’s history, beginning with the displacement caused by pre-state Zionist settlers and the ethnic cleansing of the Nakba.

Today, Jewish Israeli control of land and resources - at the expense of Palestinian citizens - is ensured through various laws and planning mechanisms, including a refusal to allow internally displaced Palestinians to return to their lands, and the role of residential admissions committees.

In the occupied West Bank, meanwhile, Israeli authorities have long excluded Palestinians from significant swathes of the region, a denial of access that is inseparable from the colonisation of the territory primarily through the establishment of Jewish settlements.

As settlement expert Dror Etkes noted on Twitter, it is the height of hypocrisy for someone like Dayan to condemn Yitzhar’s sign stunt when, as documented in detail in Kerem Navot’s 2015 report, settlements’ jurisdictional areas play a key role in closing off areas of the occupied West Bank to Palestinians.

The report found that almost a third of the West Bank, and more than half of Area C, were “defined as closed military areas” - the main goal being to “drastically reduce the Palestinian population’s ability to use the land and to transfer as much of it as possible to Israeli settlers”.

Settlers who daub racist graffiti on the walls of Palestinian homes and mosques are condemned across swathes of Israeli society, but anti-Arab and anti-Palestinian incitement is rife in Israeli media and politics, from readers’ comments through to strategic policies vis-a-vis Palestinians.

According to 7amleh’s annual Index of Racism and Incitement in Israeli Social Media, 2019 saw a racist post every 64 seconds. Meanwhile, Palestinian communities in the occupied West Bank are described in Knesset committee meetings as a “virus” and “cancer”.

Senior Israeli leaders routinely patronise, threaten and dehumanise Palestinians on both sides of the Green Line, with politicians from Likud’s Gideon Saar to the late Shimon Peres worrying about Jewish versus Arab “fertility rates” or calling Palestinian citizens a “demographic threat”.

Focusing on actors such as “extremist” settlers can be necessary and important - particularly when it comes to highlighting the violent attacks committed against Palestinians and their property, carried out with impunity and even the active cooperation of Israeli forces.

Yet, it is important to contextualise events such as the Yitzhar sign in such a way as not to obscure the decades-long, and daily, abuses experienced by Palestinians at the hands of the Israeli apartheid state. Meretz parliamentarian and former army general Yair Golan was among those who condemned the Yitzhar settlers’ sign, asking rhetorically: “Is this who we want to be, a racist state?”

Such a response shows that “gotcha” moments are just as likely to serve as opportunities for moral self-congratulation by those who disdain and performatively distance themselves from the settlers’ crude racism, while still supporting the institutionalised discrimination and segregation whose scale and impact makes the Yitzhar activists look puny by comparison.