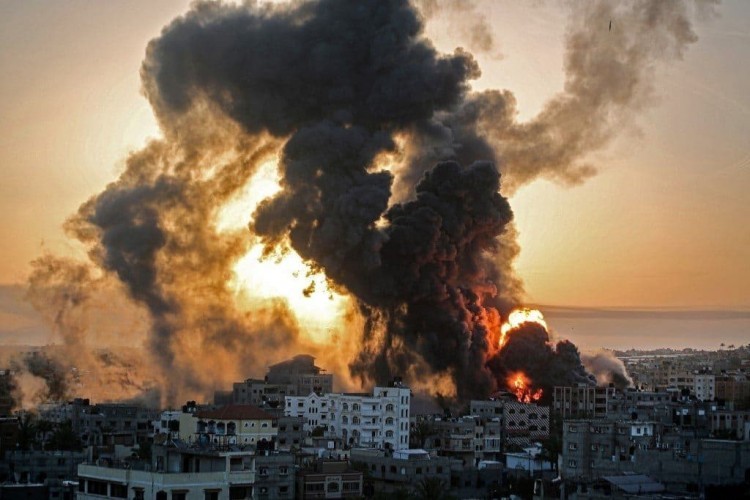 The Israeli occupation warplanes launched hundreds of airstrikes on the Gaza Strip since Monday, May 10, 2021, caused killing more than 60 innocent Palestinians and demolishing three residential towers.

Over 500 houses, apartment complexes, residential buildings sustained total or partial destruction and another 1,000 housing units were moderately or slightly damaged during the ongoing Israeli aggression.

According to the recent report issued by the Gaza Ministry of Health, on Wednesday, May 12, 2021, at 9:00 Gaza local time, 65 Palestinians were killed by the Israeli occupation forces including 16 children, 5 women and an elder man while 365 others were severely injured.

In its turn, the Palestinian resistance factions respond to these brutal crimes committed by the Israeli occupation and launched a salvo of rockets towards the occupied cities of Ashkelon, Ashdod and Birsabe’ in response to the dawn aerial attack on apartments in the west of Gaza City.

“If the enemy persists in attacking civilian homes, we will turn Ashkelon into an inferno,” Al-Qassam Brigades said in a communiqué.

Al-Qassam Brigades called the operation “ The Sword of Jerusalem” which aim to stop the Israeli violations against the Palestinian families in Sheikh Jarrah neighbourhood in the occupied Jerusalem who have been facing forced expulsion by several pro-settler organizations since 1972.

Heavy bombardment on the Gaza Strip continued into Wednesday, May 12, 2021, as Israeli occupation forces continued to launch intensive raids on various locations. Al-Qassam Brigades confirmed that its Gaza brigade commander, Bassem Issa, was assassinated in an Israeli airstrike along with other senior members of the group.

In response to killing the great leader, Bassem Issa and his fellow leaders, Al-Qassam Brigades launched 130 rockets at Ashkelon and Netivot cities.