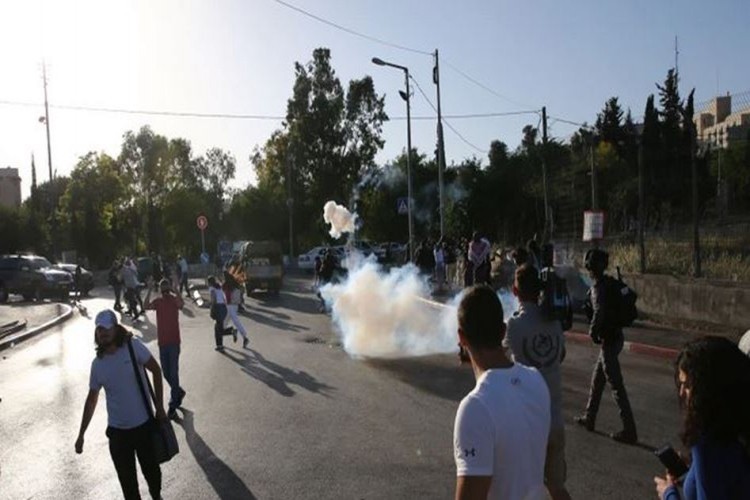 Occupied Jerusalem - Yesterday evening, Saturday, the occupation forces attacked a stand in solidarity with the residents of the Sheikh Jarrah neighborhood in occupied Jerusalem, who are threatened with displacement from their homes.

The occupation forces used a wastewater vehicle to spray citizens and solidarity activists participating in the protest after preventing them from demonstrating in front of Sheikh Jarrah's homes.

The occupation forces heavily deployed at the entrances to the neighborhood and prevented its residents from participating in the stand.

The occupation soldiers obstructed the journalists' work, as they were affected by the sewage that targeted the people in Sheikh Jarrah.

She stressed that “the people of Sheikh Jarrah do not rely on the Zionist judicial system, and consider that the Supreme Court, like other courts of the occupation that provided legal cover for the settlers, is an extended arm to uproot the Palestinians from their land.”

She also pointed out that “being on the street and standing with the families of the Sheikh Jarrah neighborhood is the only guarantee to stop the displacement.”

"Our cause is political, not legal, and we hope that the presence of young people in the streets will strengthen our steadfastness on this issue. Our presence on the ground is important, as it was useful in the victory to reopen Bab al-Asbat and Bab al-Amud.", confirmed Mona.

She also called on to daily be there in Sheikh Jarrah, in rejection of the policy of forced displacement and siege, in light of preventing citizens and solidarity activists from reaching the neighborhood residents and showing solidarity with them.

Mona sent a message to all Jerusalemites to be present yesterday evening in Sheikh Jarrah, and stand with its residents so that the rest of Jerusalem's residents does not face the same issue.

Twenty-eight Palestinian families have been at risk of eviction from the homes they have resided in since 1956. Settler groups claim that the homes were built on land that was owned by Jews before 1948, which the residents, as well as documents in their possession, deny.

The Sheikh Jarrah neighborhood is witnessing confrontations between the occupation forces and its settlers, from one side, and between the residents of the neighborhood and the Jerusalemites, the youth and the solidarity activists, who confront the settlers’ incursions and attacks, and affirm their steadfastness in their homes and land, from the other side.

The 500 Jerusalemites living in 28 homes in the neighborhood are at risk of forced displacement at the hands of colonization associations after years of complicity with the occupation courts, which recently issued a decision against seven families to be displaced, even though the residents of the neighborhood are the actual and legal owners of the land.