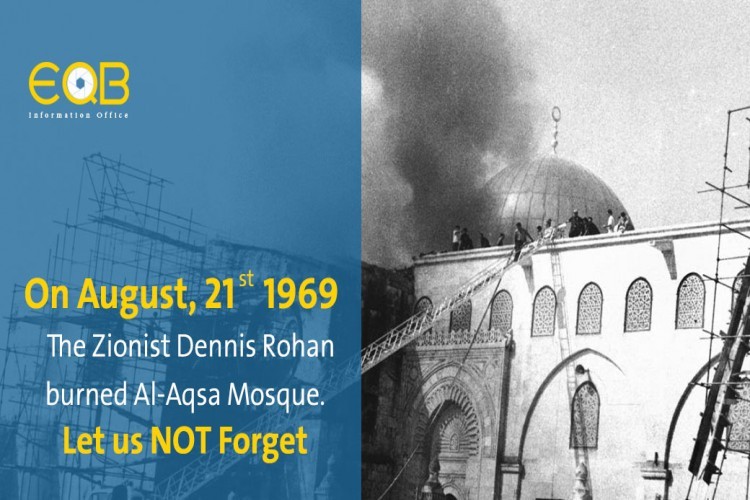 On 21st August 1969, Al-Aqsa Mosque was burned by the Zionist, Dennis Michael Rohan. It was a shocking action which received a wide campaign of solidarity and support with the third holiest mosque in the world. In the early morning of that day, the fire engulfed the Southeastern wing of the holy Al-Aqsa Mosque in Jerusalem. The guards of Al-Aqsa Mosque saw smoke rising from the mosque and the blaze inside the prayer hall.

Thousands of Palestinians rushed to extinguish the flames, but Israeli occupation forces stopped their entry. After short clashes, they made their way into the Noble Sanctuary and started to tackle the fire. However, Israeli occupation forces prevented water supplies and impeded the approach of firefighters. Meanwhile, the fire burned for hours with flames reaching the windows as well as mosaic panels on the walls and ceilings. Many sides within the mosque were left blackened and burnt.

As the smoke cleared, the amount of the damage was exposed. The fire had removed through some of the oldest parts of the mosque, most notably destroying the 900-year-old wooden pulpit gifted by the famous Muslim leader Salahuddin Al-Ayubi, after liberating Jerusalem from crusaders in 1187.

As a natural reaction, millions of Muslims around the world participated in mass demonstrations condemning this dreadful attack against Al-Aqsa Mosque.

The UN Security Council issued resolution 271 condemning this terrible attack and calling for rescinding forthwith all measures and actions taken by Israeli occupation designed to alter the status of Jerusalem.

Since then, Israeli occupation forces and illegal settlers committed several violations against Al-Aqsa Mosque including, daily raids, preventing Palestinians from performing prayers, diggings beneath the holy mosque and temporal and spatial division.

The latest violations were limiting visit permits and installing metal and electronic gates to inspect Palestinian worshippers who came to perform prayers in Al-Aqsa compounds.

Al-Aqsa Mosque was and will always be a symbol of the continuous aggression practiced by the brutal Israeli occupation. Palestinians will stand united to protect it against the daily storms and vicious raids by occupier Zionists.