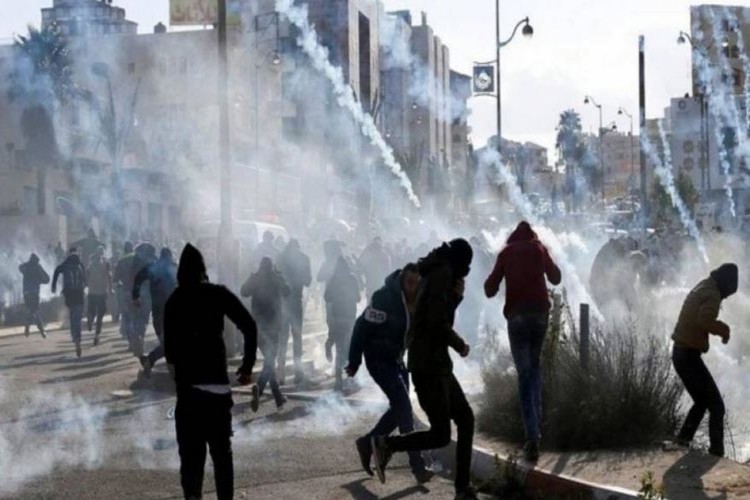 West Bank- Two young men were injured, by rubber-coated metal bullets, during confrontations - yesterday, Thursday - with the Israeli occupation forces, on Mount Sobeih in the town of Beita, south of Nablus.

The Israeli occupation forces shot, injured by rubber-coated metal bullets two young men, one of whom in the foot and the other in the hand. They were transferred to be hospitalized, medical sources reported.

Yesterday morning, a military bulldozer of the occupation forces, accompanied by military jeeps, began leveling some places of the "Al-Masbah" area on the Karm al-Nimr hill opposite Mount Sobeih.

In the same context, the nighttime disturbance activities of the mountain guards continue in the vicinity of Mount Sobeih, where the outpost of "Avitar" is located. The freedom fighters ignited dozens of tires that covered the sky in the area.

Since the start of the popular resistance in Beita, 6 young men have been martyred, the last of whom was Imad Dwaikat, who died on Friday after being shot in the chest.

Every day, confrontations erupt between young men freedom fighters and the Israeli occupation forces at the main entrance to the town of Beita, opposite Nablus Street.

Since the outbreak of the resistance, the young men have developed their methods of resisting the occupation, the latest of which is the bombing of large barrels opposite the occupation's checkpoint, and they also launch firecrackers and fireworks at the occupation soldiers who are guarding the outpost of the Mount Sobeih.

The "Night Disturbance" units succeeded in burning two mobile homes in the "Avitar" settlement outpost built on the top of Mount Sobeih.