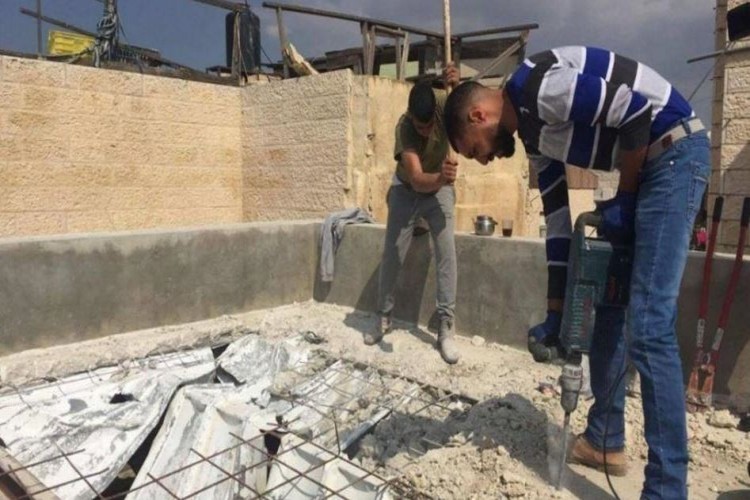 Occupied Jerusalem - Yesterday, Saturday, the Israeli occupation authorities in occupied Jerusalem forced the al-Dalal family to self-demolish three houses in the Ashqariya neighborhood in Beit Hanina, under the pretext of not having a building permit.

The occupation municipality targets thousands of Palestinian families in all villages and towns in Jerusalem and seeks to displace their residents by serving them demolition orders under the pretext of building without permits.

Although the residents of Jerusalem sought to obtain the required building permits, the occupation municipality, however, never dispenses them to Jerusalemites especially in the areas near the city center.

Demolitions in Beit Hanina are repeated weekly, and hardly a week goes without demolishing one or two houses, most of which are by the hands of their owners, forcibly, so as not to bear the high demolition costs imposed by the occupation authorities, Subhi Al-Dalal, the houses owners’ father said.

Al-Dalal explained that one of the houses was built nearly 22 years ago, and during these long years, they appointed a lawyer to defend the family against the demolition, during which they paid exorbitant fines attempting to license the buildings, but the occupation authorities refused by posing unachievable conditions.

Al-Dalal stressed that the occupation is adopting a policy of restriction and pressure on Jerusalemites to displace them.

"My family is in an unenviable situation, where children are crying over their homes and dreams", Al-Dalal said.

Since the occupation of the city in 1967, the occupation forces have demolished more than 2,000 homes in Jerusalem, and have also followed a systematic racial and aggressive policy against Jerusalemites aiming at tightening its grip on Jerusalem, Judaizing it, and tightening the noose around its original inhabitants through a series of arbitrary decisions and actions that affected all aspects of the daily lives of Jerusalemites.

Among these measures, the Israeli occupation forces demolished homes and facilities after placing many obstacles and barriers in the way of issuing building permits for Jerusalemites.

While the occupation forces demolish Palestinian homes, they issue building permits for thousands of housing units in the "Israeli" settlements built on the land of Jerusalem.