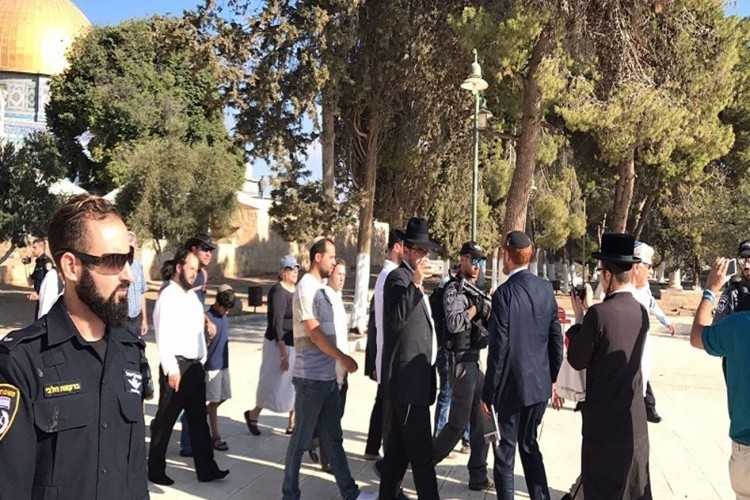 Occupied Jerusalem - Tens of Israeli settlers broke into, on Monday morning, the courtyards of the Al-Aqsa Mosque, under heavy protection from the Israeli occupation forces.

Settlers stormed Al-Aqsa courtyards, in groups, and carried out provocative tours, concentrated in the eastern area of ​​the mosque and near the Bab al-Rahma chapel, Jerusalemite sources reported.

Provocatively, settlers stormed the chapels of Al-Aqsa Mosque paying no attention to the sanctity of the mosque and the feelings of Muslims.

These incursions also take place during the morning and evening shifts (after the Dhuhr prayer) through the Mughrabi Gate in the Western Wall of Al-Aqsa, under the protection of the occupation forces, as part of periodic tours they carry out aimed at changing the reality in the Holy City and the Al-Aqsa Holy Mosque.

During the period of incursions, the occupation forces evacuate the eastern area and let go the worshipers and guardians of ​​the mosque, to facilitate the settlers’ storming.

The occupation targets Jerusalemites through detention, deportations, and fines, intending to keep them away from the Al-Aqsa Mosque, and leaving it as a pretext for settlement ambitions.

The periodic report issued by the Hamas media office in the West Bank reported 3,886 violations committed by the occupation during July.

The occupation forces and the settlers committed 22 attacks on places of worship and holy sites. While the occupation displaced 3 citizens from the places of residence and the Al-Aqsa Holy Mosque. Meanwhile, they protect (3,387) settlers who storm the Al-Aqsa Mosque.