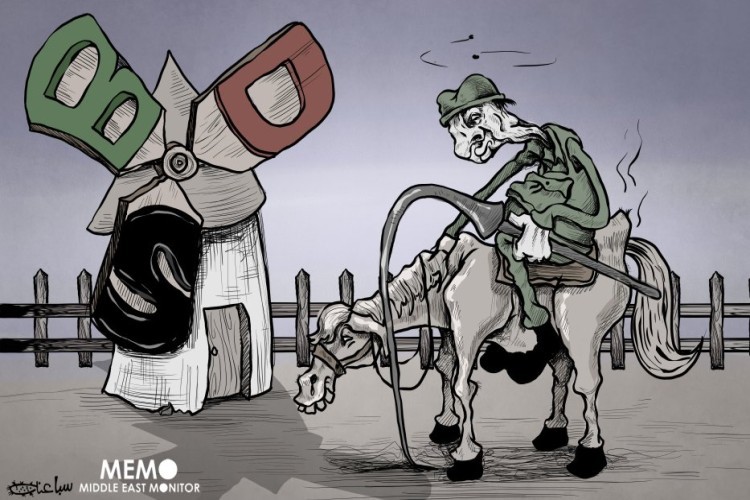 Sally Rooney, Susan Sarandon and thousands more stand on the right side of history

The decision by Irish author Sally Rooney to boycott an Israeli publishing company and not allow it to translate her novels is a major blow to the normalisers, especially the Arabs. It is also a slap in the face for those who mocked the boycott call launched by Palestinian civil society in 2005, and an embarrassment to the campaigns attacking BDS (the Boycott, Divestment and Sanctions movement) that could see no real achievements, no matter how great they were in reality, for the Palestinian-led movement. This is despite the fact that Rooney made it clear that her decision was a response to the call made by Palestinian civil society. Some opponents of BDS are very selective in what they choose to hear and understand.

Rooney's decision came at the same time that American actress and Academy Award winner Susan Sarandon chose Indigenous Peoples' Day to tweet an infographic showing Israel's confiscation of the land of the indigenous people in Palestine from the 20th century onwards. The infographic compared this to the confiscation of Native American land by European colonists.

The occupation, apartheid and settler-colonial state expressed its anger in both cases. Predictably, this was expressed through allegations of "anti-Semitism" and "not supporting peace"; peace, that is, only as the rogue state sees it.

The Arab states which have normalised relations with Israel, especially those in the Gulf, have welcomed the apartheid state's technology and military industries at Dubai Expo in the UAE, with no concern that the products of these industries have been tried and tested on Palestinian children, women and men by the so-called Israel Defence Forces. The Palestinian BDS movement has called for the expo to be boycotted because of Israel's presence. The Israeli pavilion is supervised by the Ministry of Foreign Affairs. "To us," said the ministry, "the added value is in the Arab and Muslim visitor [to the Expo]." This statement is possibly the clearest expression of what Israel expects to gain from its presence at the event. To make matters worse, the Emirati organisers are promoting Israeli participation with its culture of killing, maiming and destruction as a "glimmer of hope" for the region.

The participation of the Israeli regime at the Dubai Expo goes beyond the marketing of deadly weapons; it also serves its relentless attempts to cover-up its ongoing crimes, normalise its presence in the Arab world, and break its growing international isolation as an apartheid, settler-colonial state.

Kadim Al-Sahir, Muhammad Abdo, Nancy Ajram, Omar Al-Abdallat, Ragheb Alama, Sami Yusef, Abdul Rahman Muhammad and Ahlam Al-Shamsi should be ashamed of themselves. Have they not heard about the growing list of international artists who refuse to provide the settler-colonial state with a fig leaf of legitimacy? Sally Rooney and Susan Sarandon are just two of many, perhaps the most vocal of whom is Roger Waters. It is as if the moral minimum of support that the Palestinian people are asking for is meaningless, and as if the news about the children's blood being shed on Al-Wahda Street and in the Shuja'iyah neighbourhood, and the displacement of the people of Sheikh Jarrah, did not reach these particular Arab ears.

At the same time, and perpetuating the crime of normalisation, the State of Bahrain has opened an embassy in the apartheid state. Now we have the obscenity of Arab countries linking their interests directly and even organically to the interests of the occupation state of Israel, while international civil society, intellectuals and artists are responding positively to the struggle of the Palestinian people.

Herein lies some irony, with the question of national ties on one hand and the concept of international solidarity on the other. This was dealt with by the Palestinian BDS movement, and the criteria adopted by civil society with regard to boycotting Israel, whilst also defining normalisation, taking into account the sensitivity of the context and the fact that fellow Arab citizens cannot be seen standing in solidarity with the Palestinian cause. Such citizens are not represented by their normalising regimes; there is a clear distinction between them. Nevertheless, the ordinary people must be considered as direct participants in the struggle to end the apartheid system and settler colonialism in historic Palestine.

The many intellectuals, artists, writers and athletes who responded to the call of the oppressed people of South Africa by demanding a boycott of the apartheid regime in Pretoria were welcomed as contributors to the victory, and rightly so. We will celebrate with Sally Rooney and Susan Sarandon, and the thousands of other writers, artists and cultural icons who stand on the right side of history and refuse to give Israel's colonial apartheid regime what it craves to whitewash its racist face. As for those Arab artists who have allowed themselves to be cast in such a role, history will judge them accordingly.