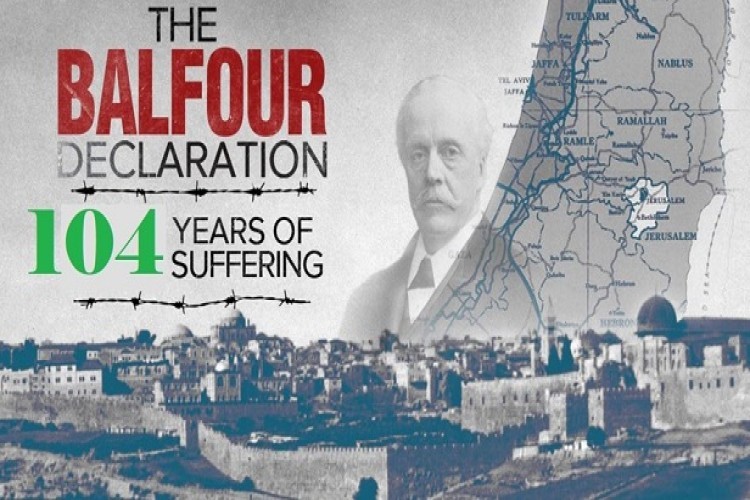 The Balfour Declaration and Terrorism

The ominous Balfour Declaration marked the beginning of terrorism in the region when it gave what it did not own to the Jews to establish their state on a land that is not theirs. They took advantage of Arab weakness and fragmentation at the time and the British influence in the region.

Since 1917, the year that Britain announced this ill-fated declaration, it became a painful reality for the Arab homeland and the Palestinian people, whose land was unjustly taken from them. It was forcibly granted to the Jewish people, who the West was seeking to get rid of and keep them away from their countries because they, the Jews, were a source of anxiety and inconvenience to the Europeans.

Since then and until now, the region has not enjoyed the security and stability that the Israeli occupation created and established for, because of the killing, displacement and expulsion that it practised against the defenceless Palestinian people in a systematic and racist manner to expel the Palestinian people and eliminate them from their land. The number of forcibly displaced Palestinians exceeded 7 million refugees, distributed in all parts of the world, most of who are in Jordan, the country that embraced them and provided them with care and attention.

There are also the massacres it committed not too long ago against Gaza and its people. Does this not go beyond the definition of terrorism? The world has failed to find an explanation or a name for these massacres.

Although the world believes that Israel is an occupying state that seized the land of others with the support of Britain, followed by American and European support, Israel has not, even for a moment, stopped its racism and violence against the Palestinian people. Israel has committed all inhumane acts against the Palestinians, including killing, expulsion and displacement and inflicting destruction and devastation on everything on the land. Not even the trees and stones were spared from destruction. It commits terrorism in its worst forms.

This declaration is a painful memory for the Arab and Muslim nations and everyone who loves peace after the occupation state crossed all the lines and violated all international charters. It rejected all Arab initiatives for peace and the establishment of the two states while intensifying its settlement activity and confiscation of the land, in pursuit of the state's Jewishness, with the aim of obliterating the reality that it is an occupying force living on the land of others by force.

Despite this, the American support and care continued after the US moved its embassy to Jerusalem during the presidency of former US President, Donald Trump. This was a new blow and an increased injustice, and it is in violation of all UN resolutions or any endeavour to achieve peace. Instead, it deepens the state of terrorism that the entire world is suffering from, which Israel bears responsibility for—and those who stand with it.

Therefore, the world will not enjoy peace and stability without a just and comprehensive solution to the Palestinian issue, and without the Palestinian people obtaining their full rights by establishing their independent State, with Jerusalem as its capital and affirming their right to return and compensation.