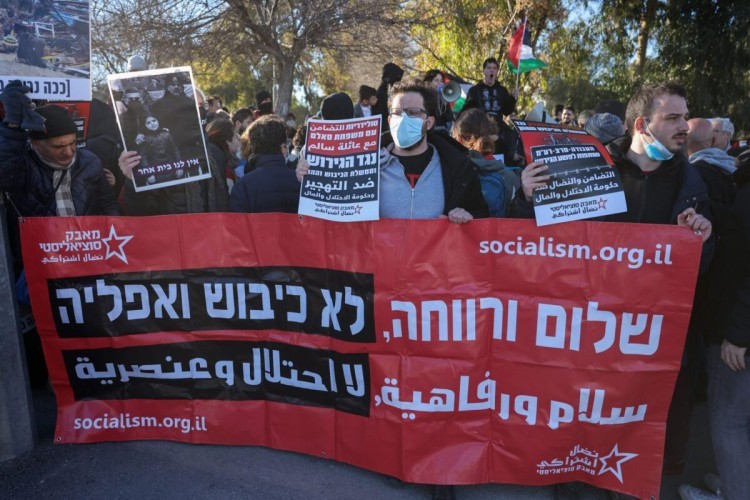 The Islamic Resistance Movement Hamas adopted a new programme in May 2017, in which it declares itself a Palestinian national, Islamic, liberation and resistance movement that aims to liberate Palestine and confront the Zionist colonial project of the so-called "Jewish State".

According to the movement's programmatic definition, Palestine is the land and home of the Palestinian people. It is a holy and blessed Islamic Arab land that has a special place at the heart of the Islamic Ummah, formed from the territory that extends from the Jordan River in the east to the Mediterranean in the west, and from Ras Al-Naqurah in the north to Umm Al-Rashrash in the south.

Would these programmatic formulations be contrary to the right of Israel to exist?

For Hamas, regardless of the catastrophes that have befallen the Palestinian people since 1948, Palestinian identity will not be erased or denied due to the partition, occupation and Zionist policy of displacement and ethnic cleansing. Palestinians will never lose their national identity and rights, even if they acquire a second nationality.

The movement's programme clarifies that the conflict in occupied Palestine is based on the struggle against the Zionist colonial project, and not against the Jews. The resistance understands that peace and security will not be achieved without eliminating the underlying causes of injustice and tyranny. This is because Israel is a colonialist entity that imposes an illegal occupation of Palestine and subjects the Palestinian people to oppression, siege, daily humiliation and systematic human rights violations. Against that, Hamas promises to fight hard.

In the new programmatic formulation, Hamas maintains that Israel is not a normal state, but an occupation of Ashkenazi, Khazar and Sephardic Jewish settlers brought from Europe, created during the mass expulsion and expropriation of the Palestinian people. Since 1948, millions of Palestinians have continued to be victims of occupation, exile and dispersion. In this case, Hamas advocates that recognising Israel would mean legitimising all the Zionist claims and myths on which the creation of the State of Israel is based.

The relationship between the Palestinian people and Israel is not a relationship between sovereign states. It is a relationship-driven by Israeli colonialism, military expropriation and occupation and the Palestinians' struggle for freedom and self-determination. That is the reality, and there is no way around it. Asking Palestinians to recognise Israel's occupation would be tantamount to asking black South Africans to recognise the legitimacy of the white South African apartheid regime, or to hope that the Algerians would recognise the French occupation during their war of national liberation.

For Palestinians, to accept the reality of their occupier and oppressor is to abandon the dream of freedom and liberation. It would betray those who fought long and hard for their freedom, self-determination and dignity, and the very principle of the universal struggle for justice and freedom – premises enshrined in the divine treaties, international law and the United Nations Charter.

The movement's leaders say that it is possible to recognise their friends, but it is rather absurd to accept the legitimacy of their enemies. They consider it ludicrous to use the recognition of Israel as a precondition for "peace agreements" or "normalisations" to take effect when it is known that Israel remains with its systematic actions of injustice and oppression against Palestinians while continuing to expand occupation.

The Palestine Liberation Organisation (PLO) recognised the "State of Israel" in 1988 and reiterated this recognition in the Oslo Accords in 1993, in addition to promoting various peace initiatives with Israel since the Madrid Conference in 1991. One must ask: what did these negotiations and this recognition give Palestinians?

Israeli governments never respected the terms of the agreements. Israel has never recognised the Palestinian people's legitimate historical and political rights to land and to return, nor their moral, political and legal responsibility for the expropriation of land and the expulsion of Palestinians.

On the contrary, Israel continues to attack the Palestinians militarily with massive aggressions – seizing land, building new and expanding illegal Jewish colonies, besieging Gaza and systematically violating the human rights of Palestinians. There are more than 4,600 political prisoners, including 160 children, 34 women, 547 Palestinians sentenced to life imprisonment, and nine members of the Palestinian Legislative Council legitimately elected in 2006 in prisons. It is estimated that since the Nakba, more than one million Palestinians of all ages have passed through Zionist prisons.

Based on the experience of these "peace agreements" and other negotiations with the Zionist occupier, there is an abundance of evidence that these initiatives have failed to bring back the rights of the Palestinians, nor did they guarantee the effectiveness of the various UN resolutions that could restore these rights. The main problem is not the negotiations, but the fact that Israel does not recognise any of the Palestinian rights. Israel simply does not abide by the agreements. It continues to transgress what was agreed upon and advances even further with its aggressive colonialist policies in the Palestinian territories.

From the viewpoint of the Palestinian resistance, it would be unthinkable, immoral and unfair to expect Palestinians, who are continually oppressed and subjugated by the Israeli military occupation, to capitulate to Israel's humiliating conditions. There is no precedent in modern history in which a people consented to the theft of their homeland without resisting. The people of Palestine have demonstrated for 73 years that they are no exception.