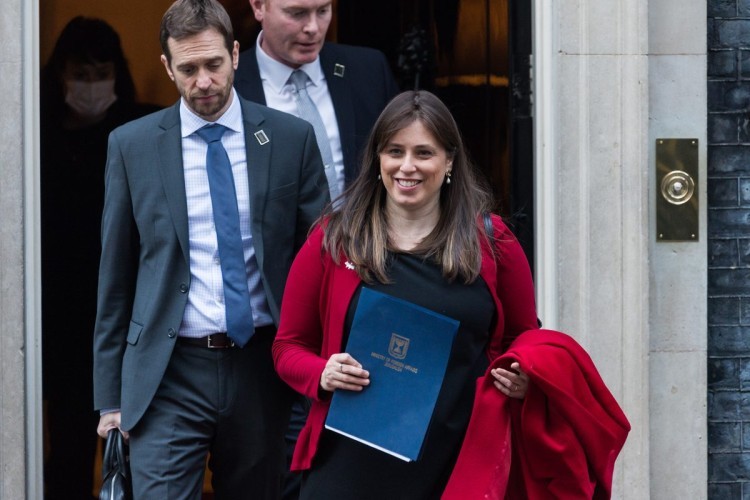 When hundreds of students at the University of Cambridge gathered on Tuesday to protest the Israeli ambassador to Britain Tzipi Hotovely's speech at the Cambridge Union, cutting it short and causing her to flee the grounds, it became clear that her track record would not be forgotten any time soon.

Hotovely, who served as a settlement minister under Israel's former Prime Minister Benjamin Netanyahu, was hosted despite the disagreement of students prior to the event. Students wrote in an open letter that the ambassador: "Is a proud supporter of Israeli settler colonialism, and an open advocate of a 'Greater Israel'."

Hotovely is no stranger to controversy, having asserted during her previous position as deputy foreign minister that the entire West Bank belongs only to Israeli Jews. More recently in the early days of her ambassadorship, Hotovely stated that the Nakba – the expulsion of Palestinians from their land in 1948 – is an "Arab lie" and a "made-up story".

Those slurs are insignificant, of course, in the face of pro-Palestine activists' famed slogan "from the river to the sea, Palestine will be free", which Israel and its supporters in the British government branded a Hamas slogan. This is despite the fact that the slogan owes its roots to the early Zionists, decades before the first Intifada and the emergence of Hamas.

The matter took on an even darker twist when the Israeli minister of the Knesset (MK), Bezalel Smotrich, who leads the far-right Religious Zionism party, toured the UK on Wednesday, visiting the country's Jewish communities.

There was a positively unexpected reaction from none other than the Board of Deputies of British Jews (BOD), however, which stated in Hebrew on Twitter that it: "Rejects the abominable views and the hate-provoking ideology of Bezalel Smotrich." The BOD called on: "All members of the British Jewish community to show him the door. Get back on the plane, Bezalel, and be remembered as a disgrace forever."

Smotrich unsurprisingly responded by making it out to be a manifestation of "internal political issues", dismissing it as a statement by: "A small group that is trying to take control and to silence [other opinions]."

The reality, though, is that the umbrella group and acclaimed representative of the UK's Jewish community acknowledged and condemned Smotrich's record as a divisive figure in Israeli politics – he leads the Knesset's most far-right party – who has called for the ethnic cleansing of Palestinians, said that former Israeli Prime Minister Ben Gurion didn't "finish the job" in wiping out the Palestinian population and espouses the ideology of Kahanism. Smotrich has even had official links to terrorism, having been detained for weeks by Israeli security service Shin Bet after being caught with 700 liters of gasoline during the withdrawal of Israeli forces from the Gaza Strip in 2005.

The condemnation did not stop there either, with other pro-Israel Jewish organizations following suit, such as Yachad, which stated: "Engagement with a person that holds such deeply racist and offensive [views]…is completely unacceptable. He should not be made welcome by any individual or organization in the Jewish community."

Even the Israeli Minister of Diaspora Affairs Nachman Shai insisted that Smotrich: "Has nothing to look forward to in Britain, the community there has already made its voice heard. Racism has no place anywhere. Come home."

Aside from the fact that groups representing the UK's Jewish communities have made their stance on Smotrich's visit clear, his visit also prompts the question of how such a divisive and genocidal figure – who has been implicated with terrorism even by his own country's security services – can be allowed into Britain.

The Palestinian Ambassador to the UK Dr Husam Zomlot told Middle East Monitor: "Bezalel Smotrich's support of illegal colonial settlements and views that Israel's ethnic cleansing of 1948 didn't go far enough, and that Jews are inherently superior to Palestinians should disqualify him from any decent company or hearing. Far-right supremacists and inciters to hate and violence must not be welcomed anywhere, let alone the UK with its strong public resentment of racism and demagogy."

Not so many years have passed since Sheikh Raed Salah, a leader of the Islamic Movement within Israel, was arrested and detained by the UK's Border Agency and threatened with deportation. Despite the fact that he arrived on a widely-publicized visit and made no effort to conceal his identity, he was forced to fight a long and arduous legal battle against his deportation, solely based on alleged anti-Semitic statements.

The classic infamous method practiced by then-British Home Secretary Theresa May, who personally ordered his arrest, was enforced even though neither Salah, Israeli authorities, the airline carrier he flew on, nor immigration officers at Heathrow airport were informed of his banned status. London made no official opposition to his visit, and no attempt to prevent his entry at the border was implemented. It later transpired that the BOD and the Community Security Trust (CST) had written to May urging her to act against Salah.

Compare Salah's treatment by British authorities with the freedom of movement and access granted to Smotrich and even Israeli Ambassador Hotovely. Both figures have made no attempt to conceal openly genocidal views on Palestinians and the denial of atrocities committed against them, nor any display of regret or remorse over their past statements. On this occasion, there was no petition from the BOD or the CST to remove Smotrich, nor did the right-wing media launch a hysteric campaign to deport him as they had done in the case of Salah.

Almost two weeks after the human rights organization Amnesty International directly acknowledged Israel's apartheid system in a ground-breaking report – which was branded by many, of course, as anti-Semitic – the former attorney general of Israel himself, Michael Benyair, came out and admitted his country is an "apartheid regime".

As prominent figures within Israel admit to the crimes committed by their country and pro-Israel Jewish groups in the UK condemn racist and divisive figures like Smotrich, the British government seems to be content repressing activists who oppose the military occupation and apartheid policies while giving its full support for agents, upholders and open advocates for that very apartheid system.