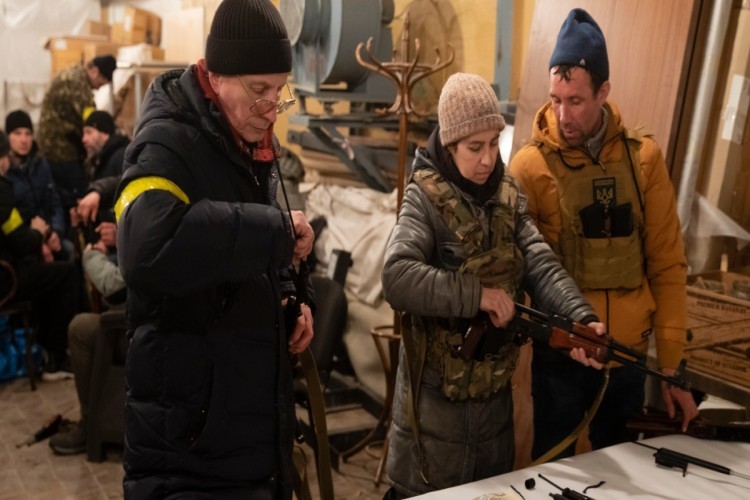 Since the early hours of February 24, when Russia began its invasion of Ukraine, the whole world has watched in awe the bravery and resilience of the Ukrainian people.

As soon as the first Russian soldier set foot in Ukraine, thousands of civilians took up arms and joined Ukrainian troops to defend their homeland against an unquestionably superior military might. Even after shells began raining down on Ukrainian cities, devastating military infrastructure and residential areas, the brave soldiers and civilians who supported them made it clear that they would continue to fight for their nation’s freedom until the very end.

Faced with this display of dignity and heroism, politicians and diplomats from all over the world clashed to condemn the Russian aggression and called on everyone to lend their support to the Ukrainian “resistance forces”.

And one of the politicians who rushed to express his support for Ukraine and its people was Israeli Foreign Minister Yair Lapid.

Speaking at a brief press conference, Lapid defined “the Russian attack on Ukraine” as “a serious violation of the international order”. “Israel condemns this attack and is ready and ready to offer humanitarian aid to Ukrainian citizens,” he said. “Israel is a country that has known wars, and war is not the way to resolve conflicts.”

Many watching this war from afar probably didn’t pay much attention to what Lapid said, or dismissed him as just another politician trying to score points with empty appeals for peace and solidarity.

But for Palestinians living under Israeli occupation and apartheid, his defense and support of the Ukrainian people was a slap in the face – it was a blatant display of hypocrisy.

And it wasn’t just Israel’s foreign minister who hypocritically condemned the Russian invasion and voiced support for the Ukrainian resistance while ignoring Israel’s own actions.

Thousands of Israelis also took to the streets of Tel Aviv “for Ukraine”. And as they marched with Ukrainian flags at the ready and chanted “Free Ukraine”, the town’s Palestinian residents watched speechless. After all, that many Israelis have never taken to the streets in Israel to demand a “free Palestine” or at least equal rights for Palestinians living under their state’s apartheid regime. To make matters worse, they no doubt know that whenever Palestinians try to take to the streets in Israel to say “Free Palestine” and raise their own flag, they face immediate arrest, police brutality or worse.

Nor has the shock suffered by the Palestinian people since the start of the war in Ukraine been caused solely by the hypocritical actions and words of Israeli officials and citizens.

Since February 24, they have also come face to face with the inherent hypocrisy of the global community as a whole.

After the Russians entered Ukrainian territory, claiming that Ukraine was never a real country and that the land was always Russian, all Western leaders, media and institutions began to speak passionately about “the ‘illegality of occupations’, of the ‘right of occupied peoples to armed resistance’. “, “the importance of sovereignty and national autonomy” – arguments and concepts they have never seriously put forward in defense of the Palestinian people and their decades-long struggle for freedom.

Over the past week, we Palestinians have been shocked time and time again, realizing that the global community has enlightened us for years.

We have learned that, despite what we have experienced in our homeland, international law does exist and work. States have the capacity and the will to act when one people invades the land of another. We have learned that sanctions can be used quickly and effectively against aggressors and that sanctioning a country for its violations of international law is not necessarily racist action. We have learned that civilian casualties are not just numbers, but living, breathing people who really matter. And we have also learned from politicians, pundits, analysts and even our own oppressors and occupiers that armed resistance to occupation is not “terrorism”, but a right.

Indeed, over the past week, newspapers, websites and social media have been filled with stories of Ukrainian “heroism and resistance” – stories of soldiers blowing up bridges to delay the approach Russian tanks and sacrificing themselves in the process, civilians attacking armed vehicles. with whatever they have at hand, ordinary people receive weapons training and dig trenches. If any of these stories took place in Palestine rather than Ukraine, they would of course not be seen as acts of heroism – they would be classified and condemned as “terror”.

News agencies have published positive, even inspiring, stories about Ukrainians making Molotov cocktails to attack Russian soldiers. The international media, of course, has never praised the Palestinians for making Molotov cocktails and throwing them at Israeli settlers and their uniformed protectors who are trying to force them out of their homes, neighborhoods and villages. When the Ukrainians do it against the Russian occupier, it is heroism. When the Palestinians do this against the Israeli occupier, it is nothing but terror.

Throughout the past week, we have also seen European populations overwhelmingly welcoming Ukrainian refugees with open arms. The same politicians who for years treated the millions of refugees created by Israel’s illegal occupation and apartheid as at best a nuisance and at worst a threat to peace, have made public speeches on the importance of to offer refuge to those who are driven from their homes by an occupying power.

And we know that all these achievements were not unique to us Palestinians. I am sure that many Afghans, Yemenis, Ethiopians, Iraqis, Syrians, Libyans, Somalis, Kashmiris, and others who were the victims of colonial and imperial violence and oppression came to similar realizations watching unfold the crisis in Ukraine.

Over the past week, I’ve heard so many people say ‘now is not the time to talk about Palestine, Yemen, Libya, or Iraq’. So many seemingly well-meaning people claim that mentioning these double standards is now “whataboutism” feeding off Russia’s hands.

But to them, I say confidently, no – now could not be a better time to speak about all the acts of military aggression, occupation and oppression in the world. Now that all the powerful Western nations, the international media and even the leaders of Israel seem to publicly accept that the occupation is wrong, that resistance is not only legitimate but honorable, and that all victims of war should be supported, we should all start talking about Palestine, Yemen, Libya, Iraq, Afghanistan, Kashmir.

On February 26, just two days after the start of the Russian invasion, Paul Massaro, Senior Policy Advisor to the US Commission on Security and Cooperation in Europe, tweeted: “I’m racking my brains to find a historical parallel with the courage and fighting spirit of the Ukrainians and to come empty. How many people have ever resisted an attacker like this? It’s legendary.

Well Mr. Massaro, have you ever heard of the Palestinians? We have bravely resisted an aggressor for 73 years. You cannot think of a “historical parallel” just because you consider our struggle not as resistance, but as “terrorism”.

Terrorism and bravery, it seems, are interchangeable. We fight our oppressors and we get branded terrorists. The Ukrainians do the same, and they are applauded for their courage.

Alas, the Palestinians still support the liberation struggles of all other oppressed peoples. We raise them in solidarity because we have experienced the same thing. We support Ukrainians in their fight against the aggressors trying to steal their land and their future too, because we have been there ourselves.

But after the events of the past week, and seeing the same media organizations and politicians demonizing the Palestinian resistance as “terror” publicly admitting that defending your homeland and your people is in fact a good and noble thing, we understand that all is just a matter of perspective. We understand that how your actions are perceived only depends on the identity of the attacker you are fighting. And we don’t think that’s OK, but we accept that it is. Perhaps because we too are “relatively civilized”.