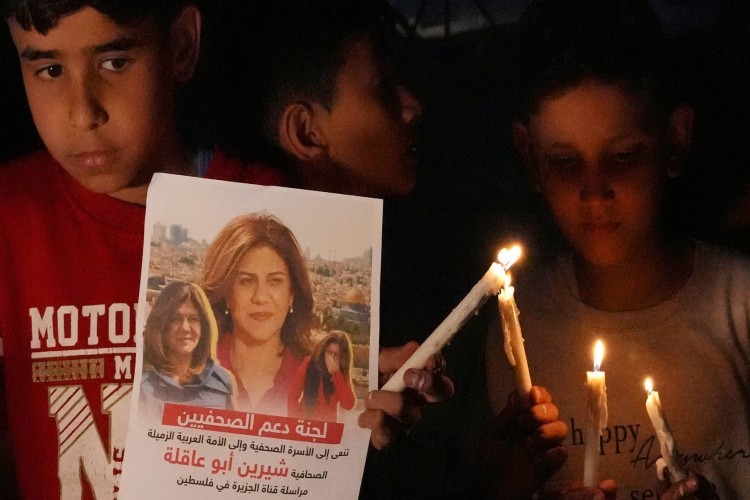 Thousands of Palestinians took to the streets to protest her cold-blooded execution. Millions of people at home and in the diaspora have expressed their intense grief over the devastating loss.

Social media and various news channels brim with footage that brings into sharp relief the systematic targeting of this Jerusalem native in life and death.

Abu Akleh’s funeral was arguably one of the biggest national events in recent Palestinian history. The barbaric Israeli assaults against her mourners and her cascade notwithstanding, these bereft and gallant supporters toiled to keep her coffin aloft.

The metaphors are immense.

A voice for Palestine
Abu Akleh was a brilliant Palestine-based Al Jazeera journalist, a household name for generations of Palestinians, Arabs, and freedom fighters who grew up watching her coverage of the often-tragic events unfolding and the incalculable atrocities visited upon Palestinians in cities and towns for decades on end.

Yet, the almost unprecedented wave of sorrow that has filled Palestinians’ hearts irrespective of faith or political affiliation in the past two weeks warrants further explanations.

In an occupied space, where Israeli brutality is an everyday reality and casualties are staple components of Palestinian life, why has the loss of Abu Akleh caused such crushing pain and heartbreak?

Shireen’s death made us realise the role she played as a voice of - and for - Palestine.

Throughout her scrupulous career as a journalist, Shireen narrated Palestinian stories of loss, joy, and grief to the outside world and did so both as a compassionate and consummate professional.

Hers was a career of a courageous modern Scheherazade, a chronicler of years of Palestinian lives under Israeli occupation.

All nations have icons - writers, filmmakers, artists, singers, and athletes who embody the best of what their societies have to offer to the rest of the world. Palestine has no small share in this humanistic endeavour. Its soil produced the legendary Mahmoud Darwish, Ghassan Kanafani, Edward Said and Elia Suleiman among a plethora of artists, chefs, musicians and others who are too many to include here.

Despite the important role these figures have played in our besieged communities, Palestinians haven’t experienced the kind of special relationship that we came to feel from Shireen’s iconic presence, whose voice and exquisite demeanour won her the hearts and minds of all who followed her even-handed approach.

A witness and a martyr
In Palestine, there are a lot of famous singers, but the devastating circumstances of the occupation allowed them only marginal mobility, unlike the freedom afforded to the likes of Umm Kulthum and Fairuz in Egypt and Lebanon respectively. Abu Akleh was that captivating female voice of a singer who told Palestinian young men and women that, like her, they too can continue to rise to the occasion.

Her "songs" were about a different kind of love.

Today, as we meditate upon the tragic loss, we are reminded about Shireen's death as an event that combined two meanings whose semantic relationship has for ages been intriguing.

In Arabic the words for martyr (shaheed) and witness (shahid) share the same root.

There has been a long discussion among lexicographers about the connection between the two words. Is the "martyr" also a witness? A witness of what? One proposed explanation is that martyrdom is in itself an act of self-witnessing, a testimony to the martyr’s sense of sacrifice, courage, and selflessness.

On Wednesday morning, Shireen was transformed from a witness into a martyr, embodying the phonetic and semantic relationships between the two Arabic words. It is as though Shireen’s death established a Palestinian take on this language discussion, where "shahid" and "shaheed" became interchangeable.

A sense of helplessness
For more than two decades, Abu Akaleh has been a witness to Israeli crimes against Palestinians. She never tired of registering them in report after report. Her assassination by Israeli forces occurred during one of these testimonial endeavours - she was covering an Israeli incursion into Jenin camp. "On my way there [Jenin Camp]. Back with more news when things become clear,” so read a note she left behind to her colleagues on that fateful May day in 2022 in which she became the news.Shireen’s execution is another example of a tragic incident of language transformation: the reporter became the reportee. Palestinians reacted to the news with disbelief: Shireen, the storyteller, became the story. This unforeseen change became acutely unbearable, with a sense of helplessness engulfing Palestinians and her supporters the world over.

Undoubtedly, the Israeli army is the culpable party here - they are the assassins. Nonetheless, for many Palestinians, a creeping sense of survivor guilt is inevitable, even if temporary, given the reality of murders in Jenin and other occupied territories.

Shireen went to Jenin that morning to cover our stories, our pain. She went for us, but we weren’t there for her. We couldn’t protect her.

Shireen’s assassination is viewed by many Palestinians as an intentional, premeditated act of cultural destruction. She joins the rank of Palestinian icons whom Israel murdered before her.

For the young generations of Palestinians, most of whom are too young to remember these murders, the loss of Shireen reminded them of the enduring Palestinian catastrophe, as her beautiful voice reminded us whenever she ended her reports “Shireen Abu Akleh, Al Jazeera, Occupied Jerusalem”.