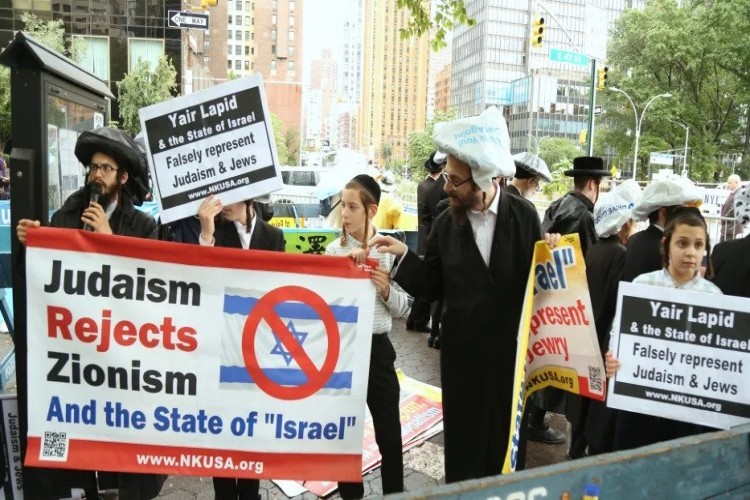 Addressing the world leaders on Thursday, Israeli Prime Minister, Yair Lapid, clearly declared his support for the two-state solution for the Israeli-Palestinian conflict, stressing this is even the best solution for all current problems for the State of Israel and for the future of Israeli children.

"An agreement with the Palestinians, based on two States for two peoples, is the right thing for Israel's security, for Israel's economy and for the future of our children," Lapid said, stressing that most Israelis support this solution and stated that he is one of them.

This declaration was lauded by most of the effective world leaders, including the US President, Joe Biden, and officials of his administration. "I welcome @IsraeliPM Lapid's courageous statement at the UN General Assembly," Biden tweeted.

In Israel, however, it was harshly criticised, but some officials like Zehava Galon, Meretz Chief, referred to Lapid's remarks as "historic." On twitter, she wrote: "Finally, the vision of peace is on the agenda. To put an end to the cycle of bloodshed, to end control over millions of Palestinians and to years of pain and bereavement on both sides."

Away from the harsh criticism of most Israeli officials from Lapid's government or from the opposition, let us check Lapid's conditions for the two-state solution in order to see whether he was serious, or just promoting lies and propaganda to blame the Palestinians for the enduring suffering they have been experiencing since before the creation of the occupation State of Israel.

Explaining his vision, Lapid said: "A future Palestinian State will be a peaceful one. That it will not become another terror base from which to threaten the well-being and the very existence of Israel. That we will have the ability to protect the security of all the citizens of Israel, at all times," citing the nominal Israel withdrawal from the Gaza Strip in 2005, and said that Israel has been met with over 20,000 rockets, not with peace.

Lapid also said that he was ready to lift all the restrictions on the Gaza Strip and help with building Gaza's economy, on condition that "stopping firing rockets and missiles at [Israeli] children, and to put down their weapons, release Israeli prisoners and make sure that Hamas and Islamic Jihad will not be ruling the coastal enclave.

I am not asking Lapid about who the terrorist is, and which side exports terror, not just to the region, but to the whole world. I am asking him who is threatening the other? The people, who produce their ineffective weapons from very primitive materials, or the people, who produce and import the most destructive and powerful weapons and have access to the latest arms technology in the world?

I wish that Lapid gives the answers for these questions to the world leaders who listened to him at the UN General Assembly.

Lapid is a very successful propagandist because he could deliver a sermon about a peace proposal that could make the world leaders break down in tears, feeling that he is representing a nation which has been enduring much pain under another nation and it is forgiving them and offering a peaceful proposal to end their own pain.

No, the fact is that the nation of Israel is living on another nation's land, without having the right to do so. In addition to this, the Israelis have been inflicting daily suffering on the people from whom they stole the land. Lapid's speech at the General Assembly and his peace vision lacked all aspects of the truth.

Then, Lapid claimed that Israel left the Gaza Strip in 2005 and, at the same time, acknowledged that there are Israeli restrictions on the Gaza Strip due to Hamas's control over the Gaza residents. He reflected a feeling of giving the Palestinians part of their lands, but they did not deserve this, but that they deserved to be punished for accepting to be controlled by Hamas.

Lapid just told lies to the world leaders, that they should have been acquainted with them. Israeli withdrawal from the Gaza Strip was nominal, as Israel remained controlling Gaza's sea, air and all ground crossings except one, run by Egypt, but at the directions of the Israeli occupation.

Then, he claimed that there are restrictions on Gaza, but not the fact there has been a very harsh and tight siege which has rendered the coastal enclave to be the largest open-air prison in the world.

Omar Shakir, Director at Human Rights Watch, said early this year: "Israel, with Egypt's help, has turned Gaza into an open-air prison." In 2010, British Prime Minister David Cameron said: "Humanitarian goods and people must flow in both directions. Gaza cannot, and must not be allowed to remain a prison camp." I think these descriptions would have made clear what kind of Israeli restrictions are imposed on Gaza, which Lapid downplayed to the world leaders.

Regarding Hamas, why does Lapid not want the Palestinians to be ruled by Hamas? First, Hamas has won an overwhelming majority in the last transparent general Palestinian elections. So why does he want the largest Palestinian party to sit aside and let the minor party or parties to rule?

Lapid believes Hamas is a terrorist organisation! Why? It is because Hamas practices its legitimate right of resistance against the illegal Israeli occupation.

If I closed my eyes and chose to accept Lapid's belief that Hamas is an extremist terrorist group and the Palestinians must be punished for choosing it, would he punish the Israelis when they choose the extremist terror groups like the Kahanists or figures like Bezalel Smotrich, Yehuda Glick and Itamar Ben-Gvir?

If Hamas is the problem, why does Israel punish the Palestinians in the occupied West Bank, or even those in Israel, who are considered Israeli citizens? The issue is not Hamas or rockets; it is only a pretext to perpetuate Palestinian suffering, and all peace proposals declared by Israeli officials are aimed at misleading the world.

Former Israeli Prime Minister, Benjamin Netanyahu – current opposition leader – has adopted the two-state solution in the past, and now he is leading the criticism against Lapid. The two-state solution used by Israeli leaders is just a means to mislead the Palestinians, Arabs and world leaders. While they continue butchering Palestinians, they intend to show themselves as peace lovers.