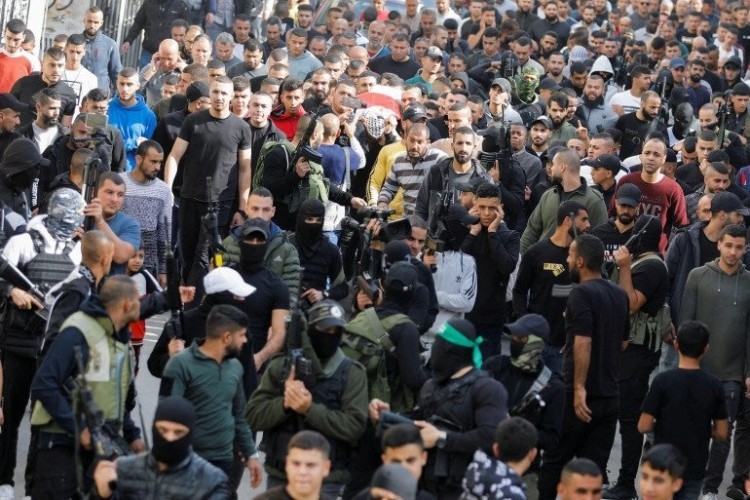 By now, the boy’s name has long been buried along with his body.

Just another forgotten Palestinian reduced to an anonymous number who joins the 199 other Palestinians, including 47 children, who have been killed by an Apartheid regime this year alone. Israel is determined not only to drive Palestinians from their ancestral homelands using illegal edicts and brute force but to obliterate them in invasion after invasion and by attrition.

His name was Mahmoud al-Saadi. He was 18. His home was a refugee camp in the occupied West Bank city of Jenin.

A picture of Mahmoud reveals a teenager with a thick mat of short-cropped, black hair, wearing a happy, if slightly wry, smile. A faint, thin black moustache was the unmistakable sign that this effervescent boy was on the cusp of becoming a man.

This past Monday morning, Mahmoud was heading to school along with a gaggle of friends. His father, a relative said, had worked hard to make sure that his son and three daughters got an education as a way out of the grinding despair and towards, if possible, a “dignified future.”

“The occupation killed this joy,” the relative said.

On the way to his high school, Mahmoud – who was at the top of his class – encountered Israeli soldiers who, in the pay and at the direction of an Apartheid state, were raiding Jenin in a convoy of armoured jeeps yet again.

Mahmoud decided to turn around and return home rather than risk, I suppose, the same fate as Shireen Abu Akleh, the renowned Palestinian-American journalist who was shot in the head while wearing a blue vest with “PRESS” written on it by an Israeli assassin on May 11 in Jenin.

Mahmoud did not make it home. (Nor, sadly, did a Canadian youngster, Aryeh Shechopek, aged 16, who was murdered on Wednesday while waiting for a bus on Jerusalem’s outskirts to take him to a Jewish seminary.)

Instead, Mahmoud was shot in the stomach by an Israeli soldier because he was a Palestinian and nearby. An easy, convenient killing of a child whose capital offence was, apparently, walking to school.

A wounded Mahmoud called out to his mates for help, telling them that he had been shot. They thought he was kidding. He stumbled forward for about five metres before resting on the ground. Frantic, his friends ferried his bloodied body by car to a nearby hospital. He could not be saved. He was pronounced dead at 9am.

“A civilian succumbed to critical wounds after he was hit by live [Israeli] occupation bullets in the abdomen, in Jenin,” the Palestinian Health Ministry confirmed.

The Palestinian foreign affairs ministry described the killing as a “field execution” and a “heinous crime,” approved by powerful Israeli politicians.

A video taken at the hospital shows Mahmoud lying lifeless on a gurney. Friends and family hover over his pale body, weeping. One man leans in to kiss Mahmoud, now wrapped in a shroud, on his brow.

None of the killers has been held to account. And they never will. Rather, they have been shielded and saluted as “heroes” for having protected Israel by killing Palestinian kids and journalists.

The predictable excuses will be trotted out again to defend the inexcusable. Israel is not to blame for Mahmoud’s death; Palestinians are, for resisting the occupation. Mahmoud was in the wrong place at the wrong time – as if he had another place to live and study. Given the confusing cacophony of war, the Israeli soldier made a regrettable, but understandable, “mistake.”

Much of the international press treated Mahmoud and the violent, state-sanctioned manner of his death as unworthy of their notice or attention.

Western governments and their preening leaders who are always quick to denounce the killing of innocents by the usual gallery of “rogue” states have gone mute too for fear of offending a nation they believe enjoys carte blanche to shoot Palestinian boys and girls.

It was, of course, left to Palestinians to celebrate Mahmoud’s full life and to condemn his sudden death.

Mahmoud was remembered as a generous soul with a “golden heart” who showed promise and purpose as a member of the Jenin Freedom Theatre, where he was a mentor to younger students and a champion of “hope” over misery.

“Your heart was big enough to embrace the whole camp, its streets and its homes,” a friend wrote. “I think of you coming to the stage, and joining the workshops to have fun and play. This is what hurts me the most, that the boy with a golden heart is gone.”

Mahmoud’s body – wrapped in a Palestinian flag – was carried aloft on an orange stretcher through the streets of Jenin, followed by a throng of chanting mourners.

A grey backpack lay at his feet. A poignant reminder of Mahmoud’s youth and his intent to fulfil his father’s dream to enjoy a “dignified future” by going to school.

While others may be eager to forget and accept what happened to Mahmoud, we should not. Decency and history demand that we not forget.