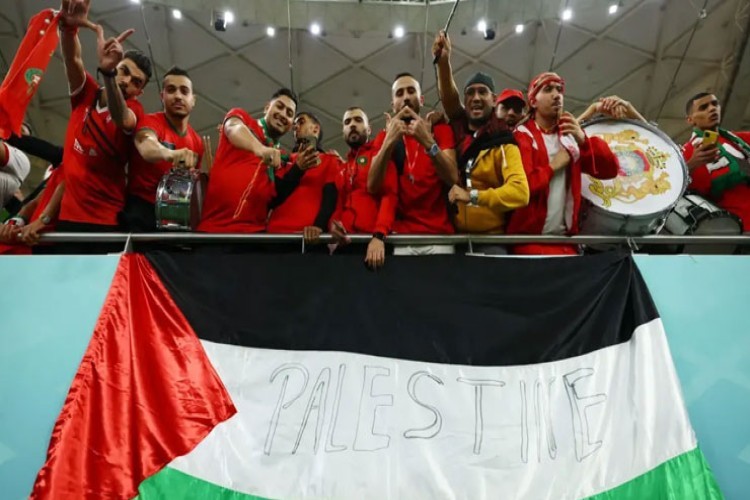 The 2022 World Cup in Qatar has witnessed a state of Arab and Islamic rejection of the Israeli occupation of Palestine through the boycott of Israeli media outlets by Arab fans in an undoubtedly plain way.

At the World Cup, there was no doubt any longer that the Arab and Muslim public position towards the Israeli occupation of Palestine was united more than any other popular or political stance in the whole world. That has been proven true by the Arab public from the Arab Gulf to the Atlantic Ocean.

Despite Arab and Islamic rejection of Israeli behaviour, the Zionists have not learned the lesson and proceeded with their failed attempts to convince the Arab and Islamic public to interact with Israeli reporters. The Israeli occupation has officially protested such a boycott as if it is seeking to force the Arab and Muslim world to speak with its media outlets in one way or another.

Let's analyse what has happened from different angles in order to give a reasonable explanation of how to handle what occurred in Qatar in a positive way that serves the Palestinian cause.

We, the Palestinians, view what happened from a very positive viewpoint. Such an angle confirms the Palestinian narrative—we are oppressed people under occupation and suffer from injustice.

Meanwhile, the Zionists view what happened from two viewpoints – the first one is positive as they seek to promote their narrative that they are an oppressed people and that they have a right to defend their existence while the negative one discloses their true face which has resulted in the boycott campaign.

The final and actual conclusion of what happened is a matter of cause and effect. The Arab and Islamic boycott is caused by the occupation and injustice inflicted upon the Palestinian people. If not for such justice, no one would have refused to speak to the media that distorts the truth. Such rejection to interact with the Israeli media is a legitimate act of resistance guaranteed by the UN for all peoples under occupation.

Thus, we may conclude what happened in the following points:

First: This is a spontaneous Arab, Islamic, and international referendum on the Palestinian cause as a central issue for the peoples.

Second: This is a scandal caused by the Israeli journalists themselves, not by anyone else.

Third: Perhaps the Israeli media has promoted Arab hatred of Jewish Israelis on purpose in order to elicit international sympathy for them. That appeared in their body language when Israeli reporters acted as if they are outcasts who do not deserve such treatment as an Arab reaction towards them. Besides, some journalists insisted on introducing themselves as Israeli before interviewing Arab fans.

Fourth: This reaction reflects a rejection of popular normalisation regardless of the official normalisation of ties with the Israeli occupation.

Fifth: It is ironic that the Israeli foreign ministry held Qatar and the FIFA Council responsible for what happened, reaffirming the necessity of respecting the freedom of the press and allowing Israelis to move freely. The Israeli occupation has killed many Palestinian journalists, including Shireen Abu Akleh, over the years, besides its suppression of the press to prevent the truth about its true image from coming out.

Sixth: The Israel Hayom newspaper said that the Qatar World Cup reflected a grim reality for the Israelis that they are rejected, ignored, and unwelcomed in any Arab or Muslim country as if they do not already know that or they are misled into believing that the normalisation of ties with some Arab nations is accepted at a popular level.

Source: This article first appeared in English in https://hamas.ps/en/post/4456/The-defeat-of-Israeli-media-in-Qatar-World-Cup

An Al Jazeera columnist based in Toronto.