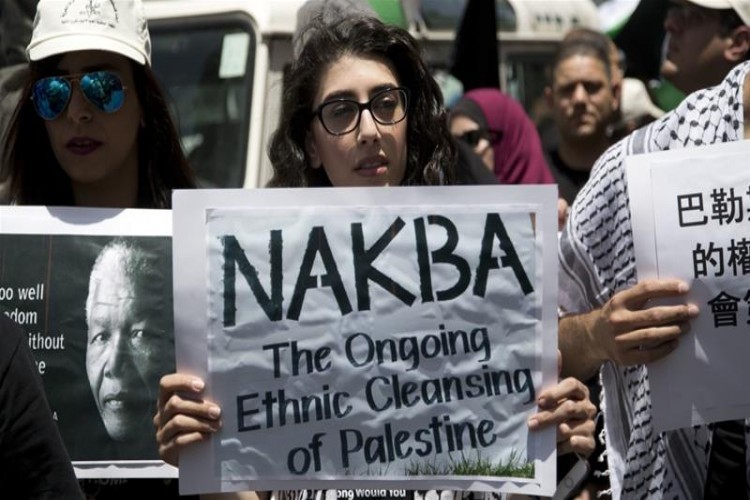 The spirit of Palestinian resistance will not be broken

Deputy Director of the Arab American Institute
May 16, 2018

If you are familiar with the term "Nakba", you probably think of it as a historical Palestinian grievance over events that unfolded 70 years ago. That was the time when Zionist militias facilitated the creation of the state of Israel by depopulating Palestinian villages, driving some 750,000 people out of their homes.

Israels founder David Ben-Gurion famously remarked: "I support compulsory transfer. I dont see anything immoral in it." Some Palestinians fled their towns upon hearing of the unfolding violence nearby. Villages that tried to resist displacement, like the village of Deir Yassin, were decimated. Conservative estimates put the death toll in Deir Yassin at 110, with a lieutenant colonel in the Israeli military who witnessed the aftermath saying: "There was a feeling of considerable slaughter and it was hard for me to explain it to myself as having been done in self-defence. My impression was more of a massacre than anything else."

When all was said and done, Israel was established on nearly 78 percent of historic Palestine, seizing or destroying well over 400 Palestinian villages in the process, and barring Palestinian refugees from returning ever since.

As Israel celebrates its 70th anniversary, Palestinians are mourning the 70th anniversary of the 1948 "catastrophe" (Nakba). If the Nakba is the "event" by which Israel devastated the Palestinian population in pursuit of an exclusivist national project, then its not merely a historical event, but very much a living reality today. This is true within Israel, where the Supreme Court continues to clear the way for the demolition of Bedouin communities for the explicit purpose of replacing them with Jewish neighbourhoods, ignoring the objections of major human rights organisations like Human Rights Watch and Amnesty International.

A similar and even more egregious process takes place outside of Israels borders, in the Occupied Palestinian Territories (OPT) that Israel captured in the 1967 war (the remaining 22 percent of Palestine not taken in 1948, including East Jerusalem). What makes the OPT different is that Israel has no right to claim these territories whatsoever, and is required by international law (numerous UN Security Council resolutions and the opinion of the International Court of Justice) to withdraw from those areas.

Israel demolished as many as 5,000 Palestinian homes in Jerusalem, and in some cases even threw Palestinians out of their homes so Jewish settlers can take their place. Israels plan to destroy the Palestinian village of Susiya in the West Bank, for example, proved even a step too far for senior members of the US Congress, with Senator Dianne Feinstein leading several colleagues in vigorous opposition.

These crimes do not individually rise to the scale of calamity carried out under more permissive conditions in 1948, but they are collectively a contiguous extension of that malevolent "displacement and replacement" project endured by Palestinians for over seven decades.

In the pursuit of a misguided conception of "balance", the US media has largely failed to convey Palestines tragedy accurately as a struggle against displacement and oppression. Instead, it was a "conflict" between two sides portrayed as equally culpable for the absence of peace.

But to resolve this "conflict," Palestinians made an extraordinary compromise in 1988: Despite the enormity of the injustice imposed on them four decades earlier, they recognised Israel as established in 1948, and settled for a Palestinian state in the OPT, less than a quarter of their original homeland. Celebrations and that famous handshake on the White House lawn notwithstanding, peace remained elusive because Israel simply moved the goalposts. Israel continued to demolish Palestinian homes and build illegal settlements throughout the OPT, and connected those settlements with roads that Palestinians are barred from using. This process cut up the OPT into pieces, making Palestinian independence impossible. In effect, the Nakba process continued under the pretence of a "peace process".

To settle any doubt about Israels true intentions, Prime Minister Benjamin Netanyahu recently declared that there will never be a Palestinian state, favouring instead settlement expansion throughout the Palestinian territories.

Because settlements make a viable Palestinian state impossible, they were condemned over the past several decades by every single US administration (except for Donald Trumps) as an impediment to peace.

Despite never applying meaningful pressure on Israel, the Obama Administration made a couple of peace gestures on their way out. First, they broke with Israels expectations of unconditional diplomatic protection at the UN, not by supporting the otherwise unanimous UN resolution condemning Israeli settlements as they should have, but simply by withholding their veto. Second, the departing Secretary of State John Kerry gave a scathing speech about the peace-destroying path Israeli leaders seem determined to pursue.

Donald Trump, however, moved us farther away from accountability, staffing his administration with extremist hardliners, backing away from Palestinian statehood, taking Jerusalem "off the table", ending the use of the word "occupation" to describe Israels military presence on Palestinian lands, and slashing assistance to Palestinian refugees by tens of millions of dollars.

So here we are, 70 years after the Nakba and its victims are no closer to justice today than they were back then. We are back at square one, and much of the world has resigned itself to tepid commentary instead of meaningful action, as Israel bars Palestinians from every avenue towards dignity and freedom: No right to self-determination in a viable state of their own, no right return to their original homes, and live sniper fire awaits those who mount an effective protest, even when theyre unarmed and non-violent.

But no matter how bleak the reality looks today, in terms of policy and on the ground, there is a counter-reality we must recognise: Human aspiration for freedom is mightier than any army that stands in its way. Bullying and coercion over the past 70 years have not broken the spirit of Palestinian resistance, and another 70 years wont either.

The Palestinian struggle for justice, which envisions the kind of equality and prosperity that protects the future of all Israelis and Palestinians, will continue until we bring this decades-long Nakba to an end, once and for all.

Note that the views expressed in this article are those of the author.