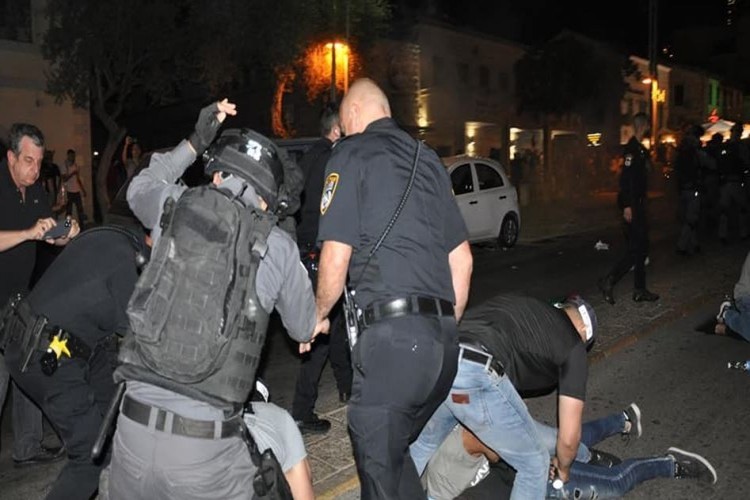 Dozens of Palestinians were injured after confrontations erupted between Palestinian young men and the Israeli occupation forces on Wednesday night and at Thursday dawn, in separate areas of the West Bank, after calls to mobilize in support of the detainees’ battle in light of the repression and violation practiced against them in the occupation’s jails.

A young man was wounded by live bullets, 89 suffocated with tear gas canisters, 9 with rubber bullets.

The occupation closed the Huwwara checkpoint after a march from Al-Quds Street in Nablus towards the checkpoint started, local sources reported.

In Beita, youths and activists called for wide participation in the night confusion activities, in support of the Palestinian detainees, while hundreds of young men gathered towards the military point opposite Mount Sbaih.

In Jenin, dozens of civilians suffocated during confrontations with the occupation in Arraba, south of Jenin.

The occupation forces arrested the nephew of the prisoner, Muhammad A’rda, who wrested his freedom from Gilboa jail.

The occupation forces set up a military checkpoint at the Arraba crossroad, tightened their siege on the village of Bir al-Basha, and reinforced their military presence in the vicinity of Ya'bad villages.

In Qalqilya, confrontations erupted between Palestinian young men and the occupation forces near the northern checkpoint of the city.

In Bethlehem, the occupation forces quelled a demonstration supporting the Palestinian detainees by intensively firing tear gas canisters at the demonstrators.

Palestinian Red Crescent crews dealt with four injuries in Bab al-Amud, some with rubber bullets, others with stun grenades.