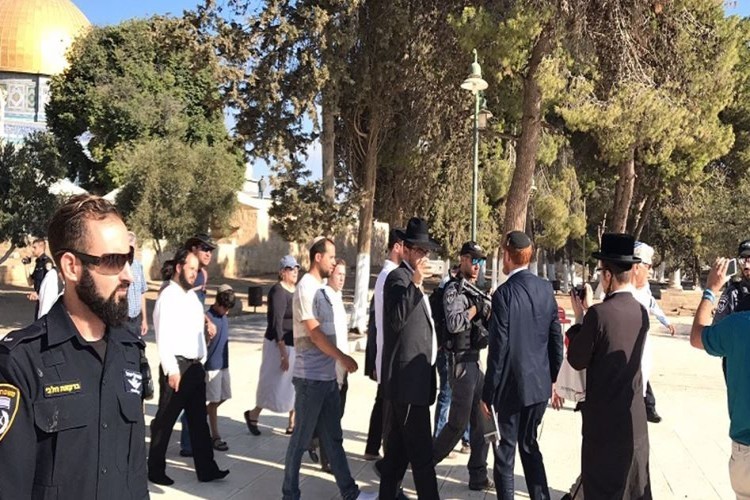 OCCUPIED JERUSALEM, Oct 13 - Today, Wednesday, Israeli settlers stormed into the courtyards of the blessed Al-Aqsa Mosque, under the strict protection of the Israeli occupation forces.

And Jerusalemite sources reported that the settlers desecrated Al-Aqsa in groups through the Bab al-Maghariba, carried out provocative tours in its courtyards, and performed silent Talmudic rituals in the eastern part of it.

Last night, the occupation forces assaulted and battered the Jerusalemites in the Bab al-Amoud plaza and Salah al-Din Street in occupied Jerusalem, pursued and detained several young men, and fired gas canisters and flash grenades at them.

The old city of Jerusalem and its gate are witnessing strict “security” measures represented in the thorough search of Palestinian citizens and worshipers in Al-Aqsa and attacks on some of them.

The occupation targets Jerusalemites and the Al-Murabitin (Al-Aqsa Guardians) in particular, by arresting, expelling, and imposing fines, intending to keep the Jerusalemites away from Al-Aqsa Mosque, and inventing them as a pretext for settlement expansion.