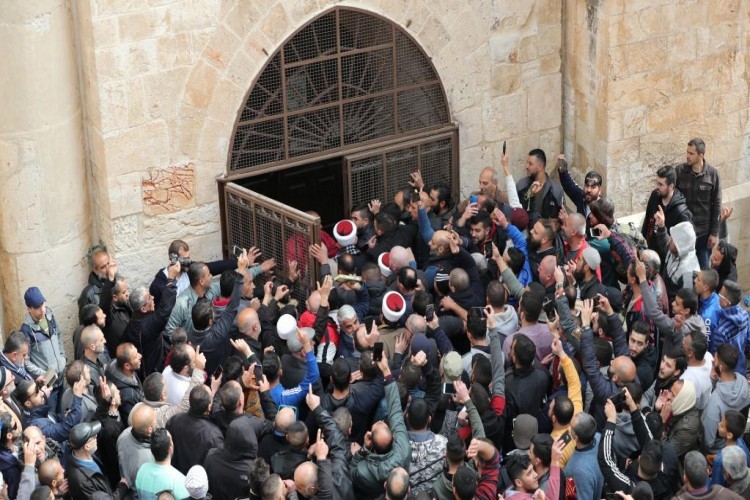 A Review of the Most Significant Events in Palestine During 2019

The Restoration of Al-Rahma Gate Prayer

The last year has witnessed a wide national movement across the West Bank and occupied Jerusalem in a protest against the Israeli plans to Judaize the Holy City.

Despite the tough conditions that Palestinians passed through, they managed to thwart the Israeli occupation's goals of settlements and Judaization.

On February 22, 2019 thousands of Palestinian prayers rushed to open Al- Rahma Gate prayer after 16 years of closure by the Israeli occupation.

A large-scale influx of Palestinian prayers progressed to break the Israeli oppressive regime in Jerusalem. They were adamant and broke the chains and the iron gates of Al-Raham Prayer.

The great joyful demonstrations spread at Al-Aqsa compounds and the prayers chanted happily: " Al-Aqsa is our mosque" and " With our souls and blood we will sacrifice Al-Aqsa Mosque".

As the declaration of Al- Bahrain Economical Conference in Al- Manama on June 2019, Palestinians rushed to foil this invalid conference. They took part in large-scale demonstrations to thwart the goals of this illegal conference which aim to execute the agendas of the Deal of the Century.

As a result, the USA could not impose the outcomes of this worthless conference on Palestinians.

During the last three months of 2019, thousands of Palestinians performed Al-Fajr prayers at Al-Ibrahim Mosque in Al-Khalil city. The number of prayers increased to reach 10.000 prayers during Fridays.