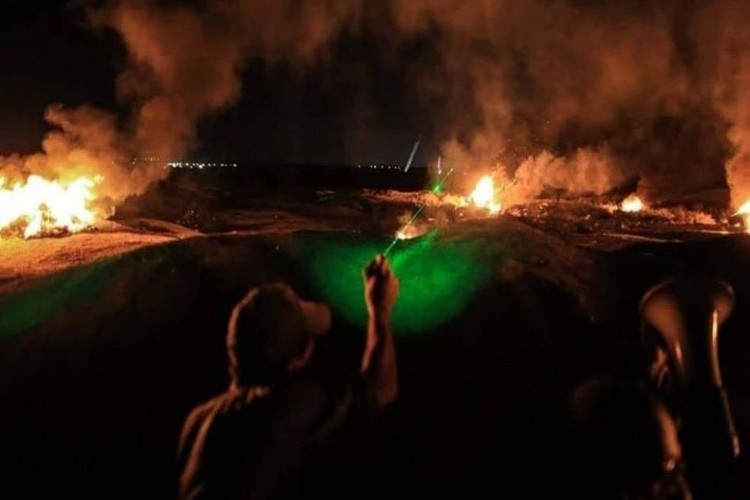 NABLUS - Ten Palestinians, Saturday evening, were wounded by live and rubber-coated metal bullets, and others suffocated with tear gas, during confrontations with the occupation forces in the town of Beita, south of Nablus.

"The ambulance crews transferred, to Rafidia Governmental Hospital, a Palestinian citizen shot in the hand with Israeli live bullets, while nine others were injured by rubber-coated metal bullets, 27 suffocated with gas" Ahmed Jibril, director of the Red Crescent Emergency Center in Nablus, said.

The people of the town of Beita, south of Nablus, organized, on Saturday evening, activities of night confusion at the town’s main junction near the main street, calling for the release of the body of the martyr Shadi al-Shorafa.

Local sources reported that confrontations erupted between the young men and the occupation forces, which were heavily stationed at the entrance to the town (Beita).

The youths set tires on the Beita junction at a time when the occupation forces fired lighting bombs to detect the freedom fighters in the area.

Since the start of the popular resistance in Beita, 6 young men have been martyred, the last of whom was Imad Dwaikat, who died on Friday after being shot in the chest.

Every day, confrontations erupt between young men freedom fighters, and the Israeli occupation forces at the main entrance to the town of Beita, opposite to Nablus Street.

Since the outbreak of the resistance, the young men have developed their methods of resisting the occupation, the latest of which is the bombing of large barrels opposite the occupation's checkpoint, and they also launch firecrackers and fireworks at the occupation soldiers who are guarding the illegal outpost on the Mount Sobeih.

The "Night Confusion" units succeeded in burning two mobile homes in the illegal "Avitar" outpost built on the top of Mount Sobeih.