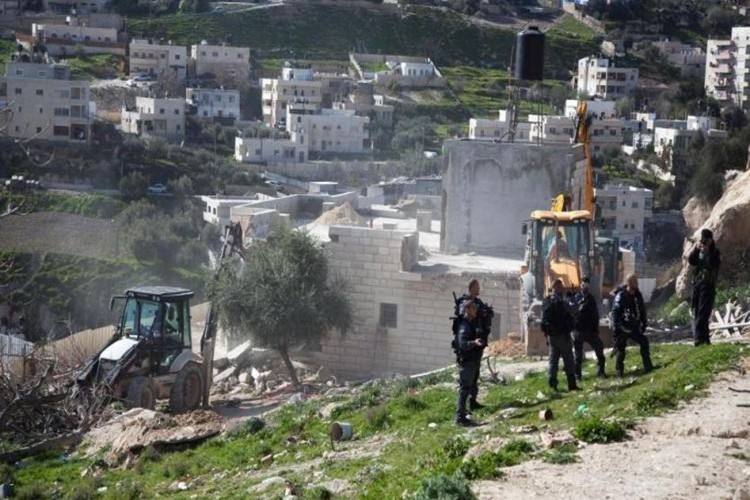 Israeli Occupation Demolishes Daycare and House in Nablus and Jerusalem

WEST BANK - Israeli occupation bulldozers demolished a daycare in the Al-Safih area of ​​the town of Beit Safafa in occupied Jerusalem, and a house under construction in the town of Yatma, south of Nablus, on Tuesday.

The daycare is adjacent to the house of the Juma family, and has been founded since the beginning of this year, and it was scheduled to start its work by the start of the new school year.

The occupation covetousness of the region goes back to the year 2000 when the Israeli occupation government back then set up several caravans on the lands of Beit Safaf aiming at bringing in some Ethiopian and Russian migrants and housing them there.

Since 1973, the lands of Beit Safafa have been divided into five parts due to the establishment of settlements.

In Nablus, the Israeli occupation forces stormed, accompanied by a bulldozer, the town of Yatma, and demolished a house under construction belonging to Baraa Ahmed Al-Najjar.

The occupation knocked the house down 15 years ago, and its owner rebuilt it. The house is located east of Yatma, in front of Mount Sobeih, which witnessed popular resistance activities in protest against the establishment of a settlement outpost on its summit, local sources said.

The occupation forces launched a wide campaign targeting homes in the same area, including demolition notifications and demolitions, the sources confirmed.

Large areas of Yatma’s lands have been witnessing razing works with the aim of expanding the “Rahalim” settlement, which is on the citizens’ lands.

The occupation government has recently escalated its targeting of homes and facilities by demolishing them, despite their presence in the classified areas of the Palestinian Civil Authority administration.

There are 13 settlements and 55 outposts on Nablus lands, which are divided by 104 km long settlement bypass roads, that destroyed an area of ​​10,393 dunums.

The occupation has established 24 camps on the governorate’s (Nablus) lands, and it has been imposing a closure on 80 areas. The alternative bypass road to Hawara main street represents one of the most dangerous settlement projects in Nablus.