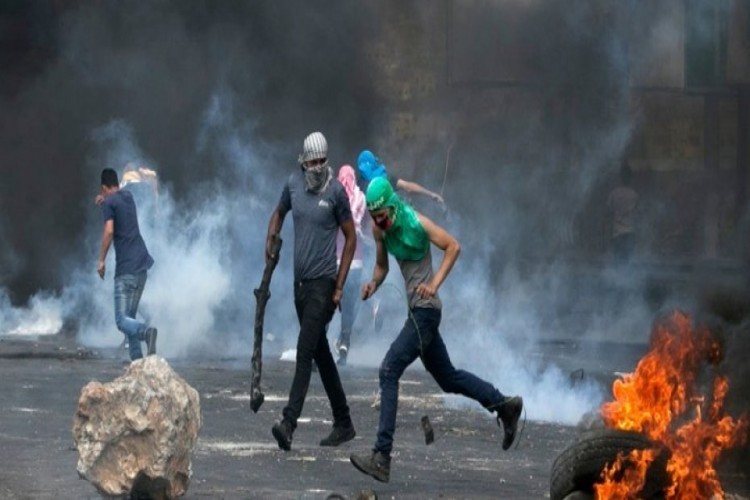 Injuries as the occupation repress protests in West Bank

West Bank- Dozens of civilians were injured when the Israeli occupation forces repressed, yesterday afternoon, marches and demonstrations in areas of the West Bank, condemning the settlements and the violations of the occupation.

Dozens of civilians were wounded, one of whom a young man, with live bullets, during confrontations with the occupation forces that erupted after the Friday prayer on a mountain in the village of Beita, south of Nablus.

117 civilians were wounded, 91 of whom suffocated because of the Israeli forces firing tear gas and gas grenades at the citizens, were first aided. 13 others were injured with rubber-coated metal bullets, Ahmed Jibril, the official in charge of ambulance and emergency service of the Palestinian Red Crescent society said.

A 30-year-old citizen was shot in the thigh by live bullets and then transferred to Rafidia Governmental Hospital to receive the necessary treatment, Jibril added.

A citizen was also injured by rubber-coated metal bullets and others suffocated with poison gas, yesterday, Friday, during the occupation repression of an anti-settlement march in Beit Dajan, east of Nablus.

The ambulance crews dealt with an injured citizen with rubber-coated metal bullets, and dozens of people suffocated with tear gas, after the occupation forces suppressed the weekly march condemning the settlements in Beit Dajan, the Red Crescent Society reported.

After the Friday prayer, the march started from the center of the village towards the occupied lands, where the occupation forces fired rubber-coated metal bullets and tear gas canisters at the civilians.

The village of Beit Dajan has been witnessing, for several months, confrontations between the freedom fighters and the occupation forces in addition to the daily nighttime disturbance activities on the lands threatened by seizure.

The settlers established the settlement outpost in the area northeast of Beit Dajan village overlooking the Jordan Valley, which witnessed razing and road construction, from the outskirts of the “Hamra” settlement in the central Jordan Valley to Beit Dajan.

In the past, Beit Dajan lost thousands of agricultural dunums in the Jordan Valley and the nearby mountains to the "Al-Hamra" settlement, the town's lands since 1969 are annexed to.

The total area of ​​Beit Dajan is about 44,100 dunams, and what the occupation stole is equivalent to at least half of its area.

Yesterday, Friday, the Israeli occupation forces broke up a protest against the settlement expansion, and the repeated attacks by settlers in Masafer Yatta, south of Hebron, and arrested three citizens and two foreign solidarity activists.

The occupation soldiers attacked citizens and foreign solidarity activists participating in the sit-in surrounded them, and fired tear gas and sound bombs at them, which led to dozens of suffocation cases and the burning of large areas of the citizens’ agricultural lands.

Hundreds of people and landowners performed Friday prayers on their lands in the "Umm al-Shaqhan" area, located between al-Tuwani and Shaab al-Butm, east of Yatta, which is threatened to be seized by "Avigal" settlement settlers built on citizens' lands.

This event comes as part of a series of weekly activities that were launched in response to several settlers erecting tents and placing a passenger bus on the lands of the "Jabarin" family in that area, in preparation for seizing and expanding the nearby settlements.

Umm al-Shaqhan is located at the entrance to the Masafer Yatta area, south of Hebron, which is threatened with demolition. The residents call it “the Masafer Gate.” It is the backbone of a large number of khirbets (ruins of a town).

Recently, settlers established a new outpost called "Givat Ma'on", which is the most dangerous from where attacks against farmers are launched, especially during the olive and grape harvest season.

Through their continuous violations, the occupation and its settlers seek to tighten the noose around the residents of Yatta and Al-Masafer, to force them to leave their homes and lands, in the interest of establishing settlements.

Hebron suffers from the presence of more than fifty outposts in which about thirty thousand settlers live, working to tighten the comprehensive Zionist grip on the governorate.

The occupation government and the settlement groups are racing against time to seize the largest possible amount of land, establish more settlements, and build roads.

Since the occupation of Hebron in 1967, and the construction of the “Kiryat Arba” settlement, the occupation has sought to turn the old city in Hebron into a settlement, helped by the Oslo agreement dividing the city into two parts, which put Hebron and the Ibrahimi Mosque completely under the occupation’s control.